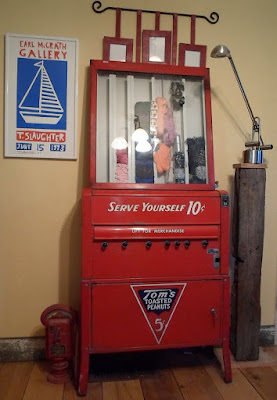 That worked just as I thought it would.  Blog stats dropped dramatically with the posting of "Party Line."  Even half of those who encouraged me to write it were out.  But on my walk this morning, those gym days were on my mind.  I might as well jot down a few more of them.

One of the biggest guys in the gym earned the monicker "Sick Andy."  Andy wasn't the most muscular guy, he was just big.  He was around 6'5" and weighed about 350 pounds.  He was a power lifter, and all he cared about was how much he could squat, deadlift, and bench press.  There was no beauty to him; indeed, he was one of the two ugliest men in the gym.  I can't describe him all that well, really, because I couldn't stand to look at him.  But he was there with his power lifter buddies, yelling and slapping one another in the face over and over again before a lift.  They weren't easy slaps, either.  They were the slaps of a dungeon master.  They were meant to psyche the lifter up so that he would have adrenaline for his lift.  I didn't see how that worked.  I knew if they hit me that hard I'd probably shit my pants, but they never did.  After getting slapped around long enough, they'd stomp over to the weight, scream a couple times, and give the weight a go.  Sometimes it went up, and sometimes it didn't but that was the nature of the thing.  Size and strength and power--that is what they worshiped.

Andy came up with another way to get psyched, though.  There was an ice cream sandwich sold by 7-11 convenience stores then called a Big Wheel.  They would bet one another Big Wheels on big lifts.  Andy looked like he was winning all the bets.

Andy stocked vending machines for a living.  I think he might have owned them, but I'm not sure.  I tried to picture this fat fucker rolling Tom's candy and peanut carts around schools and businesses, but I couldn't. I don't know if he wore a uniform or if he just went in street clothes.  I imagined him, though, in one of those grey, pinstriped shirts with a white badge that had"Andy" stitched onto it.  I liked to think of him that way.

My favorite story about Andy came from a fellow who went to his house.  He said Andy's wife was as big as he was.  What got him, though, was that Andy had Leif Garrett posters hung on his walls (link).  Everyone nodded in stunned belief at this, recalling the afternoon two young high school boys came in to work out.  After they had changed clothes in the locker room, Andy asked one if he had blonde hairs all over his body.  The boys left without getting their clothes.  The father came in later to complain, but he changed his mind once there.  He simply went to the back, picked up the boys clothes, and left.

Andy never really cared for me, I think, because I had very long hair and wore a gold hoop which wan't very common at the time.  It often caused me trouble. One Saturday I came in after a rough Friday night.  I had seen an old "friend" from my high school days at the biker bar, and he gave me a joint to try.  "This shit is really strong.  It's from Hawaii."  My friends and I smoked it that night, but something was really fucked up with the high.  I got very aggressive as the night went on, not at all the way I react to pot.  I stayed up most of the night and later realized that the joint must have been laced with PCP.  When I got up in the morning, I was still fucked up.  I figured that I needed to sweat the shit out of me, so I braided my hair, got dressed, and headed for the gym.

When I got there, Sick Andy and his buddies were training, and he started in on me right away.

"Look at that, got your hair all braided.  You look cute."

I shot something back, and after a little banter, he said, "I just might come back there and cut that braid off you."

Like I said, the pot must have been laced with PCP and I was still feeling fucked to the gills.  I was changing from my street clothes into gym clothes when I did the rash thing.  Naked, I ran out into the gym and yelled, "Hey Andy, you want my braid?  Come try it.  I'll fuck you right up the ass!

Andy turned purple, his eye bulging, but Tom, his training partner held him back.

"Leave him alone," he said.  "He's fucked up or something.  Something's wrong with him."

I got out of that one pretty lucky because I didn't stand any chance against Andy.  I'd have taken a sever beating for sure.  I went back and got dressed and came out into the gym and trained.  I looked at Andy and made a joke and he joked something back and everything was fine and weird again.  Everything relaxed.

I don't know whatever happened to Andy.  He just quit coming one day.  I think I remember that he changed gyms.  Other muscle gyms were beginning to open up around town, and there was one I believe that was closer to his house  Whatever it was, he was gone.  I never missed him.
Posted by cafe selavy at 8:41 AM