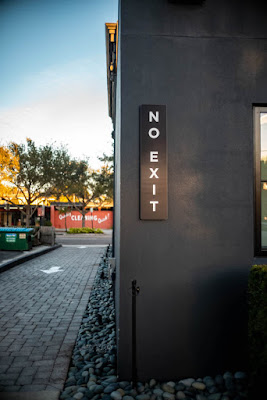 I walked around with my new used camera yesterday.  I love it, and even though it is a beater, I probably won't send it back.  I shot with a Lens Baby Velvet macro lens.  It made some interesting images.  I haven't processed any yet, but I will, and you will see them.

It rained during the night.  It is raining now.  There was a slight break in the weather, and the cats were at my door when I got up.  They got to eat before the rain began again.  They must have known.

States are beginning to ease Corona restrictions.  They are doing this so that they won't have to pay unemployment benefits.  They can't afford to. They took the money and spent it on other things.  Now, with their tills bare, they look around, palms up, and wonder where the money will come from.  It is the same with pensions and the same with social security.  Politicians can't stand to be flush.  Trump is the best.  Just borrow the money.  If there were consequences for politicians other than mere elections, things might be different, but there are not.  Political irresponsibility is simply accepted.

I am arguing with friends about Biden's electability.  I say the sexual assault claim is going to cost him too much.  My friend's say that the left is already lining up behind him as they did for Clinton.  I don't think that will help him that much, and in the end, it could cost him, especially with young voters or any woman who has ever had someone stick his fingers in her unwilling butt.  There is a rage that comes with defenselessness that I have begun to learn.  Conservatives feel differently about all this than do liberals.  Talking about it with my mother, I said Biden would lose votes.  Mom's a Trump voter.  She said, "That was back in 1993."

Conservatives don't care if Trump does it, but liberals will leave you at the mere suggestion of impropriety.

"What choice do they have?  They are not going to vote for Trump."

"They will find the new Nader."

Maybe my friends are right.  Maybe they will vote for Sleepy Joe no matter what as long as Trump is president.  But these are our choices?

What a fucking world.
Posted by cafe selavy at 8:58 AM