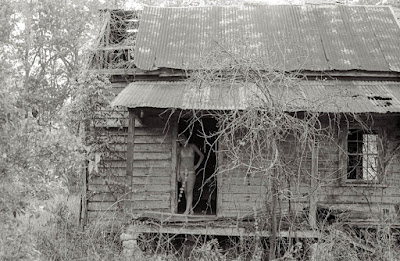 One day, Van built a little sleeping room above the gym that you entered by climbing up the ladder in the fenced in rear courtyard and opening a metal freezer door.  The space was not big enough to stand up in.  You had to climb up and squeeze in and lie on the bedding there.  Van, it turned out, was living there.  He opened the ductwork so that the space was air conditioned, rigged it with a couple electrical outlets, and put a small black and white t.v. at the foot of the bedding.  He had a hot plate for cooking.

I figured he had fallen on hard times.

Van began looking to sell the gym, and he found a buyer in one of the gym's members, Charlie.  Charlie was part of the gang who had gone to high school together.  He had been one of the first to join the gym back then.  But Charlie didn't look like he worked out.  Ever.  Not in his whole life.  He was short and round and balding and married to a woman who worked for the telephone company.  Buying the gym had been his dream.  And dreams can come true, as they say. . . .

For Van, things were getting weird.  He was looking even more furtive than ever.  Eventually, the story began to get around the gym.  Van's girlfriend's daughter had gone to stay with her father in Texas for the summer.  While she was there, she told her father some stories about Van.  Her father took her to see a doctor, and the conclusion was that the stories were true.  They went to the police.

Van, it turned out, had been hiding in that little cubby like some Montana vigilante.  But this wasn't Montana, and eventually, he was found, arrested, and sent to prison.  He asked Big Eric to hide a box of Polaroids he had taken.  There were whispered rumors, but the box, as far as I knew, never emerged.

After he went to prison, stories about Van began to make their way back to the gym.  Van wasn't being treated well, we heard.  He was a bald child molester, and in prison jargon, he was a punk.  We heard horrific tales.  They had shaved his head.  He was made to wear lipstick and eyeshadow.  He ws passed around like candy.  Not a few of the gym members had been to prison on various charges, so there was intimate knowledge of what happened "on the inside," but mostly the talk was of what it took to protect yourself in there.  The sex lives of prisoners was never a topic of discussion.  It was taboo.  It was not something you could ask.  But it was agreed that Van would be given a very rough time.

Van was released from prison some years later, and I was shocked when he showed up at the gym, but I guess it was the only real home he had left to go to.  Even weirder, though, was that his girlfriend had waited on him to get out. And when he came to the gym, she came with him.  I don't know what sort of denial she had going on or if she knew about the thing the whole time.  There were a lot of questions I couldn't ask.  Van didn't act much different, though, from the way he acted before he went to prison.  He walked through the gym in the same way, talked to friends and looked people in the eye.  I tried to picture him in makeup, but it wasn't easy to do.  Maybe it wasn't true.  Who knew?

But we never saw the daughter again.
Posted by cafe selavy at 8:38 AM