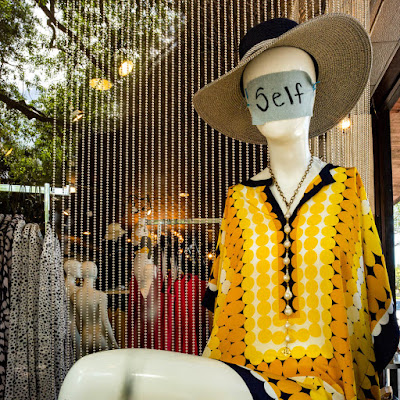 Much pain and terrible nightmares.  That is how I spent the night.  I got up several times hoping to end both things to no avail.  Each time I went back to bed, the pain would commence and the nightmares would flow.  I'd wake and try to think some pleasant thoughts, but it was no use over and over again.

I finally got up for good early in the morning.

I feel the specter of last night hanging over the day.

As has been my daily practice, in the afternoon I went to my mother's house to sit outside with her at a socially acceptable distance and have a beer.  As I was leaving to come home and make my evening meal, a woman on the sidewalk was shooing a cat and speaking French.  To me, in English, she said there was a bird on the ground.  I went to look and saw a large chick under the oak tree.  The cardinal parents were excitedly trying to protect it.  Satisfied that she had done her duty, the French woman walked on.  WTF?  I looked at the cat and I looked at the chick and knew I couldn't just leave it there, so I asked my mother for a box.  I put the chick in the box and set it atop a bush in my mother's yard where maybe the cat wouldn't get it.  I didn't know what else to do.  The parent cardinals kept flying by, but there was really no way they could help.

When I got home, my mother called to tell me that the chick had flown out of the box. The parents kept coming down and calling to it and it fluttered over to the neighbor's house.  I saw it try to fly while I was there.  It wasn't ready.  It could only fly short bursts and could only get about three feet off the ground.  It couldn't possibly make it.

Maybe this is what poisoned my tortured night.

When I took my walk yesterday, I returned by way of the Boulevard.  People were sitting in the park and at tables set up outside.  Every restaurant had big takeout signs.  The shops were dressing their windows.  Monday, they will open.

I feel sometimes as if I am the only one isolating.  I haven't put gas in my car since early March.  I have all my things delivered.  When I told my replacement at the factory this (in a text), he was astonished.  My mother's neighbors all ask if she wants anything when they go to the store.

So I texted one of my buddies from the factory who is single, like me, lives alone, like me, is an only child, like me, with one elderly parent, like me, and who was having all her needs delivered, like me, and asked if she was going to start going out for necessities.  She texted back that she was not leaving the house until June.

So there are two of us, at least.

My secretary from the factory is young and single, and I wondered what she was doing on a Friday night.  She texted back that she was doing nothing (frowny face) and that she wanted a boyfriend.  I told her that at this point, I'd probably take one, too.

Unless you haven't been touched in a season, you can't understand.  Isolated couples, isolated families have their own difficulties to deal with.  But for those of us who live alone, what we wouldn't give to curl up with somebody on the couch, to sing and laugh, to have someone to make dinner with.

The day has broken beautifully.  I need to go and let it fill me with sunlight and happiness.
Posted by cafe selavy at 8:08 AM