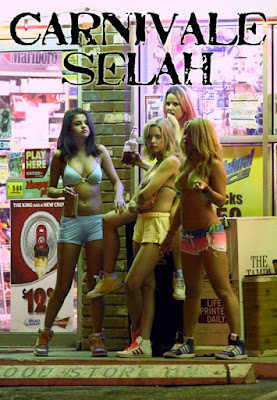 I gave in.  Friday.  The wrecking crew came around lunch.  I asked my mother if she wanted to have a picnic in her driveway.  Hot dogs, potato chips, beans. . . . Oh, we partied.

I didn't feel so well after.  My stomach was in rebellion.

I took a walk to the lake, to the neighborhood dock.  It was a swell afternoon, and there were lots of kids leaving as I arrived.  Not kids, but "kids."  Pretty ones.  And their boys.  It only intensified the loneliness of another socially distant Friday.  Sometimes it feels as if I'm the only one doing it.

When I got to the dock, everyone had gone.  I sat looking out at the big lake with the wind in my teeth.  The late afternoon light, the blue sky and breeze, all so gorgeous and hollow.

Fuck it, I thought, I'm ordering takeout.  I called the hipster fusion noodle joint and ordered: Miso Ramen with Shoyu pork bone broth, chaser, ajitama brulee, kiruage, scalion, fried garlic, black garlic oil, domudama, and a side order of of wings fried in kimchi butter sauce.  On my way to pick it up, I stopped at the liquor store and bought two bottles of the best sake I have ever tasted.

When I got to the restaurant, there was a line a mile long, people waiting to get drinks at the bar.  It is a small restaurant, and it was packed with young hipsters, none wearing masks.  They were happy and laughing.  And there I was, old guy with a mask, asking if I could skip line to get my takeout order.  They all looked at me with irritated amusement.  I could hear, "Sure, pops," in my head.

The world out there is not like the one I'm living in.  Is it me?  Am I doing something wrong?

I ate my meal in front of the television.  The soup was good, but it was not the one I intended to order.  The wings were spicy.  The sake divine.  I finished one medium sized bottle and opened another.  I watched something on t.v.  What was it?  Oh, yea--"Knives Out."  It is a movie version of Clue.  I had the plot figured out in about fifteen minutes, but I watched it all.  In my baggy shorts and t-shirt, fried chicken sauce and spilled sake stains soaking in. 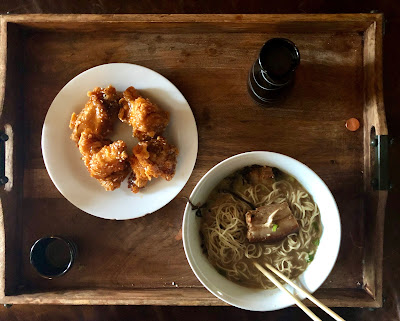 That was a lot of fat in one day considering how clean my diet has been for the past few months.  I went to freshly made bed with the clean sheets drunk and bloated.

Young Americans are having less sex than ever, CNN reports, due to a lack of employment and extended adolescence, part of a larger trend toward delayed development.  Q told me he would give up sex if he could quit work and move back in with his parents.  I have quit work and have had no sex for months, and I don't even have to live with my parents, and I can say it isn't all that he imagines it to be.  But maybe that is because I am not hanging out at lakes and in bars on a Friday/Friday night.  But really, they are not having sex?  Everything looked like sex to me.