Murder or Sex and Hurricanes 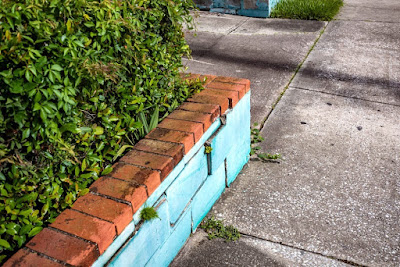 In school, when we had to eat in lunchrooms at long metal tables, Sloppy Joe day was the best.  Everyone loved those cheap-ass Sloppy Joes, a slather of some unknown but tasty meat-like substance in a zesty tomato sauce served on a big, white bun.  I remember loving them.  They were really good.

Today I realized that I had some ground beef in the refrigerator that I had forgotten to put in the freezer.  It had to be eaten tonight.  I don't know what made me think of it, but I Googled recipes for Sloppy Joes.  It was the menu item du jour.  After visiting with mother, I went to market and got what I needed. 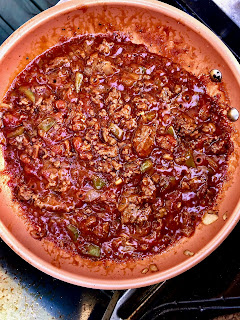 I was dubious, but it all came together.  And man, it was good.  It was nothing like what I had in school, though.  I don't know if that can be recreated.  Mine was a bit sweet, and I think next time I will cut down on the amounts of catsup and brown sugar.  And I know I will use bourbon.  Bourbon was the missing ingredient. 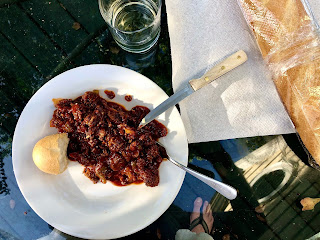 A simple loaf of bread and some wine, though not the right one for this meal.  It was my first attempt, however.  Next time everything will be mo' better.

Two nights of dishes I ordinarily wouldn't eat.  Carbonara and Sloppy Joes.  Look what happens in the Time of Corona.  You have to find pleasure where you can.

Since March, I have had two meals at my neighbors and two take-out orders with my mother.  I've gotten take-out for myself three times.  That is in six months.  My meals are much better than the take-outs, of course, but I get tired of doing all the prep and cleanup for a serving of one.  I've done that for 180 days or so.  Times however many meals per day.  It is like living in olden times.  That is what I keep thinking about.  If I lived here in the sunny south in the days before WWII. . . well. . . I don't know how they did it.  Reading "Killing Mr. Watson," I marveled at the madness it took to withstand those summer days and nights.  There were few if any luxuries.  All they had was killing and fucking.  The rest was just sheer misery.  So take my whining with a big pinch of salt.  I know.  I know.  I am living in the lap of luxury, even if prices are rising and it is difficult to find everything.  There is still more than enough.

But we know that too much is never enough.

Carbonara and Sloppy Joes modified will become part of my new mix of meals, things to cook when I am feeling low.  They are party foods, even if it is a party for one.

Pow!  Kaboom!  I wasn't even drunk when I wrote that last evening.  I was just excited.  It doesn't take much now.  There has been neither murder nor sex in my life for months, and I'm starting to wonder which will come first.

The hurricane approaches.  It is difficult to determine what will happen by watching the news.  They are driven by profit, and they profit when we stay tuned to the latest provocative forecast.  That doesn't mean the danger is not real, it is just difficult to judge by the melodrama on t.v.

We'll know tonight.  But if this passes off the coast and does little damage, there are other developments off the coast of Africa to watch.  Yes, that is what we do here in the summer.  We watch the slow motion disasters come toward us for weeks, the spaghetti lines of probability moving around from day to day like odds at a the track.  Those of us who have not gone mad with Corona Time will surely be broken by the weather.

I watched this last night (link), a documentary ostensibly about Banksy but really more about the lineage that led to him.  It was quite informative but dry.  If you were anywhere near that scene, though, in any of the decades, you will be better informed by watching it.  It draws a nice distinction between graffiti and street art.  I was not a fan of graffiti, but I always liked street art.  I can better tell you why now.

I got so excited that I texted the drummer from the old band.  His street art style was quite ahead of the curve and had a lot to do with what made us well-known.  He could put up flyers with nothing more than a Neutron Bomb or Bad Jets (our two most "famous" songs) and everyone knew it was us. I had to give him kudos last night.  He sent me some of his recent work at his house near San Francisco.  He says that the neighbors keep taking them down. 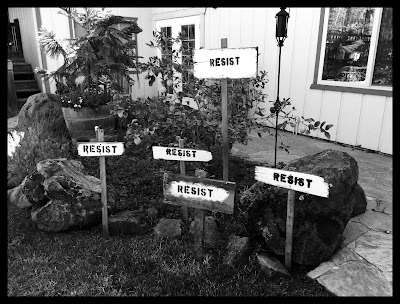 I should mention that he has an MFA in photography from the U. of San Fran and taught art before he  went into the tech business.

So that was my pre-hurricane Saturday night party.  I was in bed by ten, my head and belly full.

If I have power, you'll be hearing from me tomorrow.  If not, I'll probably slit my wrists for not having bought a generator like every other person in the neighborhood.  Most of the doctors and lawyers and dentists here have the big ones that are plugged into the natural gas lines and can run the entire house, including the a.c.  The sound of those things chugging when I sit in hot, moist misery will determine weather it is murder or sex that comes first.
Posted by cafe selavy at 8:25 AM