The Way I Love You 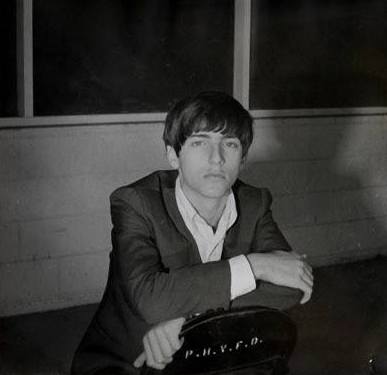 The neighbor's cat has not been around for days.  Many days.  The poor feral cat has been forlorn.  She shows up for meals, sometimes, but without enthusiasm.  She looks about as if waiting for her lover to come.  It is obvious she is lost without him.  I try to be sweet to her but she is inconsolable.

Last night, when I pulled into the driveway after visiting my mother, there they were, the two of them.  She was alive again, happy and animated.  I took my sushi dinner inside and came back out to feed them.  He was warm and wanted some affection, but the feral cat tried to prevent him getting near, staying between the two of us until he was close enough for me to reach out and scratch his head.  She won't get close to the hand.

My poor mother.  It took her a couple years, I think, to be able to say Obama.  Now she is in the same bind all over.  She has never heard the name Kamala before.  She tortures the name.  Carmela is the closest she has gotten so far.  All these foreigners in American politics.  The country has gone to shit.

I can't change her mind.  Her own son is just one of those snotty, effete, uppity people who thinks he's smart but can't even do nothing.

I can hardly disagree.

I read through more letters yesterday.  Emily was like the feral cat when her family moved away.  She couldn't eat, she said.  She felt sick.  She got into arguments with her parents and her brother.  She loved me and always would, forever and ever.  She wrote it over and over again.  She would send me pictures.  She would buy me presents.  But there were two things she wanted. 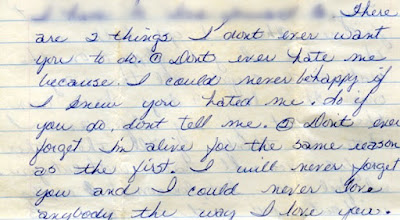 I need to put the letters away.  I need to quit it.  It is shameful, I know, the way I feel when I read them.

I'm afraid people will find out.

Yesterday, I dug out a storage container looking for the old yearbooks.  I couldn't find them at first and thought that maybe I didn't have them any longer.  I unpacked the container until I reached the bottom.  There lay three the three thin yearbooks from so very long ago.

I lay down upon the guest bed and turned on the lamp.  I held them in my hands for a moment, looking at the years.  I began with the first one, before I knew Emily.  I looked through the pages.  I could remember some people and laughed at the thoughts.  Chubby Howie.  I tried to remember any conversation we ever had.  He had been in my class since second grade.  Looking at his picture made me chuckle, but I couldn't remember a single word we ever spoke.

Those were different times.  Life wasn't as easy or safe.  Here was the kid with the polio leg, and there was the kid wo was hydrocephalic.  We didn't call it that, of course.  He was a water head.  Several kids had severe hare lips.  Everyone said the girl with the coke bottle glasses was a retard.  Nobody would sit next to her on the bus. At the end of the school year, kids signed one another's yearbooks.

I was sweet.  That is what the girls said.  One boy had written, "Good luck with Kathy!"  Who was Kathy.  I was stunned, but on the same page, in large letters--"Hi Lover, Kathy!"  I looked back through the photos trying to find a Kathy that I might have liked.  Nope.  Nothing.

I looked through the next grade pictures.  It seemed I knew more of those kids than the ones in my own class.  I had become precocious maybe, or maybe it was from playing in the band.

I opened the next yearbook, the year I "went with" Emily.  We had all changed a bit.  Helen, one of her best friends, had a sexy, sultry look, more woman than girl.  Her other friend, Cindy, still looked like a kid.  She would become beautiful in a couple years.  I was still sweet.  Emily and I were an item.  I don't remember it being so public, but there it was on the page, comment after comment.

I looked at the clock.  The hours had passed, me in some time warp. I put the yearbooks aside and called my mom.

It doesn't matter what Trump does.  My mother hates Biden and that Carmela woman.  She hates Nancy.  She can never say her last name.  And that other guy who is always with her.

"You know who I'm talking about."

"You don't even know their names, but you hate them," I chuckled.  It is outrageous, but she's my mom.  She had her mail in ballot, and I asked to see it.

I should have set it on fire.

I left her house to pick up my sushi.  The fellow getting it for me got nervous and confused.  He couldn't find the order.  The fellow in charge said, "No, I'll get it.  It is no problem.  He is my friend," he said referring to me.  He has served me many sushi meals over the years.  It is nice to have a friend.  I don't even know his name.

After I fed the cats, I got my own dinner out and arranged on the tray in front of the television.  I had bought a nice bottle of unfiltered sake to go with the nigiri and edamame and miso and the avocado I had sliced.  I had made it home in time for the six o'clock news.

I looked out the windows of the kitchen door across the deck.  The cats were gone.  The news was the same.  Trump was acting outrageously, Covid had not gone away.  There were still campaigns and predictions about the coming election.

Nothing had changed.  As I had been doing all year, I was eating alone.  I thought about those kids in the yearbook.  It was all so far away. I wondered what had become of them.  I wanted to know.  They would all be old men and women now, those who hadn't died.  My own life had gotten better for a long time, I thought.

I just couldn't reconcile that Emily was dead.  Why was it so haunting?  I thought about the two things she requested as a kid, the things she never wanted me to do, and I was spooked.  Had I forgotten that she was alive?

I won't forget that she is dead.