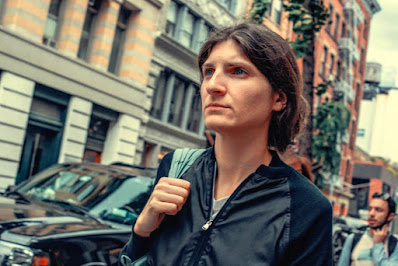 Mr. Fixit didn't come today.  He texted me at six this morning.  Rain, he said.  Bad.  In relief, I agreed.  Sit by the window and sip your coffee, I said, and think about the disaster that is your life.  No, I only said part of that.  The second part was only for me.

And so I did.  I drank coffee and then went for a walk and an outdoor workout at the outdoor gym a few miles from my home.  I felt like shit and didn't want to do it, but after sitting for hours without ambition, I felt the need to do something.

When I returned home, I showered and did nothing.  Not exactly true.  I went back into some old files and cooked up photos like the one above.  So in a sense I was right.  I did essentially nothing.

Something is hideously and terribly wrong with me.  I am a barely walking corpse, a meat puppet lacking vitality or drive.  Indeed, it hurts to move.  Covid long-hauler?  You know what I think.

At the appropriate time, I took beer to my mother's.  Guinness.  It was the draft in a can kind with the little carbonation balls in them.  I tried to explain to my mother.  The Guinness was sixteen ounces.  My mother said that it was a lot of beer, but she finished hers before I finished mine.

At home, I felt no need to cook once again, and for the fifth night in a row, dinner was an avocado with minced garlic, salt, and red pepper, after which I opened a can of Amy's Lentil Soup.  Cooking meat has not interested me in some time now.

After dinner, I poured a whiskey and surfed YouTube.  WTF?  I found this.

Now, two ice cream sandwiches later, I am here, writing as I imagine I won't be able to in the morning.  But the dishes are washed and the coffee pot is loaded and ready.  I have a very busy week including a cardiology exam, a beauty appointment, and picking up Thanksgiving Day dinner at Whole Foods and having dinner with my mother.

When I got home tonight, my mother called to tell me that one of her neighbors asked about me tonight, an attractive lady my mother thinks I could be interested in.  Sure, sure.  Not bad for an old guy who hasn't been out of his pajamas in nine months.