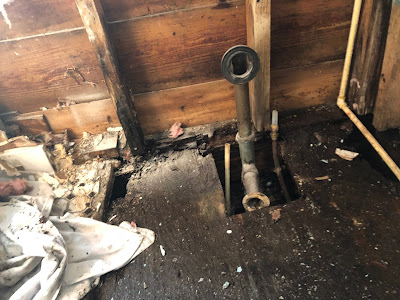 I am not able to write regularly now.  Mr. Fixit gets here around 6:30.  Today we ripped apart the bathroom.  Much damage, more than he expected or really wanted.  He is dismayed.  Breaking out the 600 plus pound cast iron and enamel tub was exhausting work for him.  He cut it with a metal saw and then beat it with a ten pound sledge hammer.  As he busted things up, I pulled them out.  See the pvc pipe on the right?  It had two pinhole leaks that sprayed a fine mist of water.  For how long, I don't know, but he says it looks like a long time.  The water has wicked into the studs.  The entire bathroom subfloor needs to be removed.  All the tile on the floor and walls is coming out.  Mr. Fixit is exhausted.

I am, too, in a different way.

Old houses are for young people.

More destruction tomorrow.  Monday, I have been ordered to go to a cardiologist.  Bad ju-ju.  As I said, the house is emblematic of the character who lives in it.  If it is bad news, I won't let you know.  At least not at first.

The weather has changed here now.  Out of doors is extremely pleasant.  We are in for some good days and nights, I think.

But I swear to you, this has been a truly bad year for me.  It is surely one of the two worst years of my life.  I'm holding up, though.  Chin up and listen to the bagpipes.  No whining or crying boys.  We salute those of you about to die.