Being Cool Under A Not So Cold Snow Moon 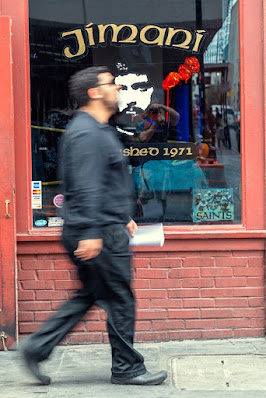 Did you get to see the full moon last night?  Me, neither.  I went out for a moment, but the sky was cloudy.  Perhaps I gave up too easily, but I hadn't the energy for waiting.  I mean, I had things to do.  Ha!

I probably did have things I should do, but I did nothing.  That pill I took the night before must have been a 24-36 hour thing.  I didn't wake up all day.  Oh, I got up in the morning and did the usual in a very thick cloud, and I even walked to the FedEx and UPS stores to see if they had boxes the right size for shipping my prints. UPS did, and I told them I'd be back.  Then I went home and made a big sausage, egg, and waffle breakfast.  I wanted mimosas but had no champagne, so a beermosa had to do.  Afterwards, I was too tired to even clean up.  I went back to bed and didn't wake up until after four.  Of course UPS was closed by then.  Closed Sunday, too.

I showered and went to see my mother.

Then I ordered food. 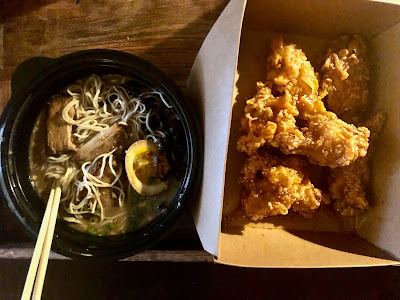 Of course it is important for me to show you a photo of my meal.  That is what people do.  It is like you didn't even eat if you don't share a picture.  It is important not only for you to see the photograph, though, but to know that I got my meal from a very hip hipster place, and that I was cool there.  That is so very important for you to know.  Coolio.  I even sent the photo to my buddy who says that those kimchi battered extra crispy wings are the best you can get.  Yes, only that could succor the fact that I was eating alone in front of the television watching a reality t.v. show.  I should leave out that last part and just go with the how hip I am stuff maybe.

The lost point of it all, though, is that I never woke up.  After more beer and a couple of scotches and several back to back episodes of "Below Deck Mediterranean," I hit the CBD oil and was off to bed.

All by way of saying, I did not see the moon.  But I did sleep a full eight hours.

I am a drug wimp.  I don't know how people do what they do with drugs.  I can drink fine, and I enjoy it, but drugs fuck me up in ways they don't seem to effect others.  As much as I admire Uncle Billy in "Love Actually," I am not like him.

Except to opioids.  There, just remember--Safety First.

I just looked up "opium overdose" on Google.  I wanted to see if it is possible to overdose smoking opium.  Here is what it says on the Drug Free Partnership to End Addiction website:

Opium can cause euphoria, followed by a sense of well-being and a calm drowsiness or sedation.

Well, that doesn't sound awful.
The sun is shining and the sky is blue and it will soon be over 90 degrees.  Snow Moon?  People have fled their cold and damp homes in the north, it seems.  Hotel and motel prices along the coast have doubled--if you can even manage to get a room.  Pandemic?  Not in this state.  The governor says that sunshine and liquor will cure anything, especially an ailing economy.
I need to see if it can cure me.
Posted by cafe selavy at 8:15 AM