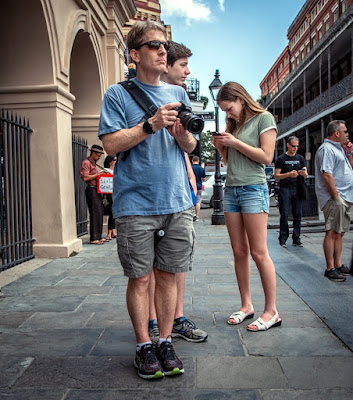 I have a neighbor/acquaintance/friend who has published a number of novels set in my own home state.  I don't know him intimately, but we speak often.  A couple weeks ago, we spoke about traveling and found we were thinking of going to the same place, a small, old fishing town on the coast north of here.  I saw him yesterday, and he queried, "Aren't you supposed to be on vacation?"

I told him of my plumbing woes and that if I HAD gone, I might have come home to a sink hole.  The thought chills me.  I asked him how his trip went.  That is when he stepped near and did the look around.

"Well. . . I don't want to talk too loud.  I don't know the politics of the neighborhood.  We had a nice time, went out on the river, saw wildlife. . . but man, that's some Trump country.  Everywhere you went there were signs in front of businesses saying 'Impeach Biden' and 'Stop the Steal.'"

"That's what its like anywhere rural," I said.  "And 'those people' can be mean."

"It was scary," he admitted.

I then went into my admonition of the left for having created such a polarity.  I blamed Clinton, of course, and especially the virulently Woke.

"I'm working through that right now," he confided.  "I just finished a book with a lot of Black characters. . . ."

I stopped him there.  "What do you know about being Black?" I said.  "Why do you think you can write a Black character?"

He looked taken aback.  "Well, that's the blowback my publishers fear.  They said I needed to get some Black critics to read the manuscript and give their feedback."

I don't know if he took me seriously or not, but our conversation quickly ended.

This morning, I read this (link) and this (link).  Before that, I had read Michelle Goldberg's op-ed on the Cuomo situation (link).  Goldberg is one of my favorite editorialists.  She is bright and insightful, but the last paragraph of her piece gave me pause.  Her assumption is that Cuomo is guilty.  I'm no Cuomo fan, and if I were a betting man, I'd put my money down on, "Yea, he did it."  But that is not how it is supposed to work, I thought.

That, however, was an old liberal ideal, I guess, and liberals seem to be everybody's enemy now.

I assume that if my friend's book gets published, it will be a self-published e-book on Amazon.

It seems funny to say that someone is "liberal."  It sounds to me like the highest compliment you can pay someone, but it also sounds fairly stupid.  "My liberal friends. . . ."  It is so categorical.  And for years, I have agreed that "liberals lie."  Anyone declaring themselves liberal sound as though they are someone carrying a hall pass.  And yet, many of my friends. . . .

I've oft said that my favorite crowd of people are the ones in the museums in NYC.  I love walking through the Met or MoMA or the Gug just to be among the people.  There is a sensibility that is almost palpable.  Should I say it is a "liberal" sensibility?  All I know is that it is different than the one I sense at a NASCAR race or a professional wrestling match.  And though I like and even admire cowboys, I much more enjoy sipping a glass of wine at the bar overlooking Central Park at the Met.

Having said that, I can be accused of many things.  I mean, who is represented in the Museum?  Who does it invite?  It seems pretty privileged and pretty white, doesn't it?  Should I explain why I feel so comfortable there?

There is no need, of course.  There are those who will do it for me.  Would they be wrong?  Maybe not.  But are we allowed to make assumptions based upon the odds?

I thought you were only supposed to do that if you are in law enforcement.  Ho!