Isolation and the Great Unwashed 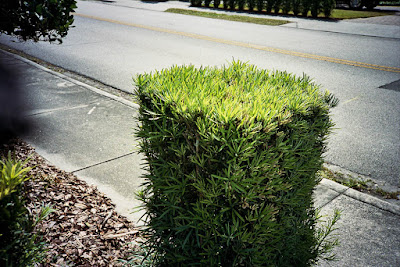 Not a picture to warm the cockles of your shriveled little heart, is it?  Just another Pomo snotty Eggleston-influenced image of things so obvious they go unseen.  I've been taking lots of them lately.  I think I am getting better at it.  There is a shabbiness to the modern landscape that must be glossed over if we are to continue the illusion of living well, so our brain reshapes it without recognition.  It is what I see either by training or by some immutable weakness, however, and I photograph them.

I love these photos.  I hate them.  They are for that group who reject the unromantic Pictorialism of Lonesomevile.  Each, however, is making a similar statement about the nature of pleasure and beauty and the worldly condition we enjoy and suffer.

I wonder, however, if the difference doesn't lie between subtle irony and outright sarcasm.  I mean, this picture does seem more than a little snotty.

I had no idea of beginning with that.  I thought to write something descriptive and beautiful.  That is what I thought, at least, when I lay down in bed last night after reading Salter.  And it is what I tried to think when I woke multiple times during the night, but my mind was going to other, more disturbing places.  I struggled from midnight on.  You know how it is.  Without sleeping again after three, I got up at five.  I determined that I would not read the news first, that I would write or read Salter, but as I so often quote, there is nothing that competes with habit.  And so the morning began in deep darkness with me repeating the past.

The news was not good.

One of the nice things about being isolated in the Time of Covid--and it is still The Time of Covid--is that I neither pranked nor was pranked by anyone on April Fool's Day.  Such childishness seems more so during the plague.  Had I been reporting to the factory, some token to the day might have been offered.  Isolation, I now feel,  has improved people somewhat.  Most have needed to learn how to spend time alone.  I knew that my ex-girlfriend could not spend time by herself, and I was right.  She ended up with Covid.  Some would rather share the internal demons than suffer them alone.  But many have benefitted from being away from the fray of the hoi-polloi.

Now, being among "the great unwashed" gives me the heebe-jeebies.  I am determined, however, to wallow in the sour mash of humanity in an attempt to become a born-again creative.  It will just take time and a lot more vaccines.

To wit: tonight I am going to a little photography opening for the Goth girl from the camera store.  It will be a hipster event, I am certain, with lots of Budweiser and Pabst, and I do not plan to stay long among what is sure to be an unvaccinated mob.  Still, I must make my presence known.

But the affair begins before I will be through getting beautified.  Somehow, I ended up with a late appointment on a Friday.  I will be blond or blonde.  I am like Dan Quayle spelling potato/potatoe sometimes.  And yes, I pronounce the "th" in clothes and the first "r" in February.

What an f'ing ramble.  It is still dark as dark can be.  I will have another cup of coffee and then determine if I want to go back to bed.  I can do that if I like, and coffee has no effect to that end upon me.  I think I will write a little more elsewhere now.  No. . . I think I will re-read more of Salter's salacious novel.  Literature requires it.

I just must not forget to feed the feral cat.