Let's Never Speak of It Again 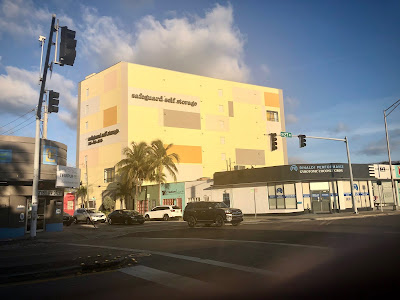 It was a mistake, a disaster.  I should not have gone.  I went for all the wrong reasons.  And if I were to go somewhere, it should not have been Miami.  It has been a nightmare.

The trip down was fine, but I was anxious about finding a place to stay.  I had mapped the International that I had suggested yesterday.  The place was a wreck.  It looked like the cheap motels on the outskirts of town that serve as home for drug addicts and criminals on the run.  It didn't even look as if it were a functioning business.  And that is what I could have had for $150/night.

I decided to try to find something in Coral Gables.  It was the wrong time to try to drive to Coral Gables.  The eight mile or so drive took an hour.  I creeped from stoplight to stoplight through some horrible parts of town.  7th St. I think it was.  This was the fastest route according to Siri.  I went past derelict buildings, and human cripples, past some of the worst living conditions I have ever imagined.  Tired, depressed, traffic at a standstill, I found a hotel recommended on Bookings.com as being highly rated.  It was just off a congested highway in a zero part of the county.  No go.

I drove around some more, but I was tired and couldn't remember the layout of Coconut Grove.  The traffic was worse.  I pulled to the side of the road and looked at hotels again.  I chose the Marriott downtown.  It wasn't cheap, but it was the cheapest anywhere near anything.  It was late.  Slowly, through downtown after work traffic, every street one way, the wrong way.  I circled the hotel several times.  Finally, I could get to the entrance.

I was beat.  I checked into what looked like a hospital room.

And that was the start to a terrible night.

I don't wish to continue with this tale.  Let's forget about this one.  I never wish to speak of it again.  It was the wrong place at the wrong time.  I spent a lot of money and had no fun.  I went on a whim.  It was an impulse.  I was torn about leaving and went against my instincts.  I was bored with my Covid life.  I was not prepared for the other.

I am glad to be home.

What if a bad thing happens, a terrible thing, and no one is there to see it?  Do you need to talk about it?  Can you just keep the secret and leave the thing alone?

I indulged myself last night, an arugula salad, spaghetti carbonara, a moderately expensive bottle of wine. I went about the house lighting candles and carved marble oil burners from the East. The maids had come while I was gone.  I walked through the house touching various talismans--books, cameras, fabrics, odds and ends--and poured a glass of scotch.  The world I inhabit gets rarer and smaller.  The world around it is angry, terribly poor and wretched or disgustingly wealthy.  They live next to one another but the barriers are extensive and high.  In between, people are polarized and increasingly violent.  Did this all happen during lockdown while we were nestled safely in our quarantine?  I don't remember a world so harsh and ugly.

I don't know.  It could possibly and simply be me.  As I've said, I've been more isolated than you.  I can't say that it was worse.  Perhaps this weekend was simply a lack of judgement, a wrong direction, a shock to the system, contrapuntal to my quiet life.  I am not done.  I will begin again.  In California, I hear, they drop off people released from mental hospitals and prison in downtown San Francisco.  This may be apoccryphal , but I believe it is true as much as it makes no sense.