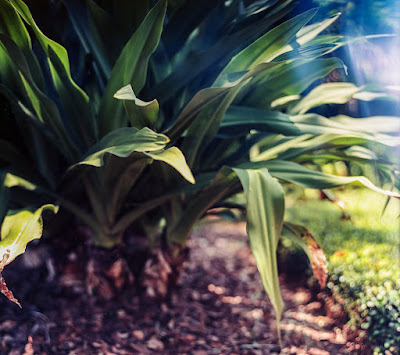 Call it what you will.  This was test #2 with the Liberator.  It does a lovely job with making things out of focus, or rather, of limiting the plane of focus to something very narrow.  The thing to do is learn how to work with it.  I've had the camera for almost a decade and I haven't used it enough to learn much at all.  It is a more cumbersome camera than I had imagined it would be when I bought it.  It is not only the camera, however.  Everything is expensive--film, holders, hoods.  As you can see, there is a light leak on the right side of the image.  I don't know if it is the holder or the back of the camera.  If it is the holder, I don't know which one.  I have about fifteen, and they are all old.  Or it may be the way I place the holder in the back.  There is a lot to go wrong.

I am looking at shooting 8x10 film.  I have shot it before, but again, I gave up.  I am sending off four sheets of color film to be processed.  I think it is color film.  I think it has been exposed.  It would be from years ago since I haven't used the 8x10 camera since I retired.  God knows.  But the film costs $10 per sheet and developing costs the same.  Each image, if it turns out, and if it does, bad or not, costs $20.  That is pretty ridiculous.  Why would I do it?  Even processing my own 4x5 film is costing about $6.50 per shot, again whether it is any good or not.  Not even instant film costs that much.

As I've said before, I'm like a guy carving ducks and seagulls in his garage.  I'm like a stamp or coin collector.  There is no money in it other than on the outgoing tide.  You know.  The guy who has been building an airplane in his garage for the past decade.  The guy who has the old cars that he plans on restoring.  Always a guy.  Why is that?  Why is it always a guy?

I worked on things photographic today.  I finished the book. . . sort of.  I've ordered a copy to see what it looks like.  I will be able to go through it better in print form, I think, and if it needs more editing, I will go back and make the changes.  If I can live with what I have, I will let you know, and if you think you want to pay the publishing cost of the book, you can get one.  Again, no money to me, the duck carver.  I just like you and am giving you something I've made for cost.

Yes, you can order the Cyprus Stump Clock Table if you hurry, and I'll throw in a Popeil Pocket Fisherman at no extra charge (link).

I had an idea once for a project back when I had the studio.  I was going to call it Small Trades.  I wanted to photograph people in their work uniforms.  I shot two lifeguards and an equestrian.  That was as far as I got.  I think I should try to start it up once again.

But now I need to go cook dinner for my mother.  Until tomorrow. . . . 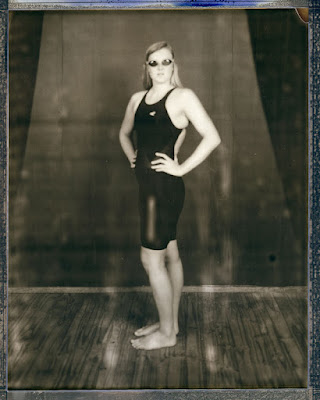 Looking back at this makes me sad.  I want a studio.  I want to have the energy for these projects again.  Why didn't I do more on this?  Coulda/woulda/shoulda.  Gets me nowhere.

I haven't done anything for two days.  I haven't taken a walk.  I haven't showered.  I haven't even washed my face.  The thought of getting back into the gym, of being active, is burdensome.  Showering, too.  I think there is something wrong with me.  I am succumbing to "it all."  I have become a simple, stinky automaton.  I came back to my mother's and made dinner, poured a drink, watched television, took a pill and went to bed.  I somehow feel that it would be wrong to enjoy life more than my mother.  Yes, that is it.  It is true.  And having said that, perhaps that is the thing wrong in many people's lives.  Of course it is.  Guilt.  People should be as miserable as the one's they love.

Self-love, I'm told.  One needs to practice it.  I have never been good at that.  Self-indulgence, yes, but not so much love.  I always figured we were here to take a beating.  But maybe today I could try.  What would I do today for someone I loved?

That is a dilemma many must suffer.  The love practice is harder than it seems.

O.K.  I need to fix my mother some breakfast.  It is easier just to take the beating.