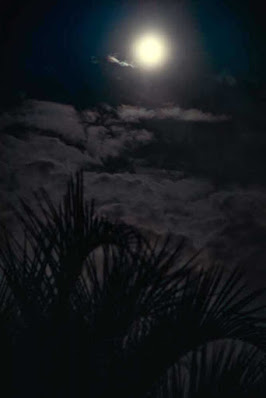 I almost made mistakes last night.  Almost.  After dinner with mother, I was headed home to no snacks.  I panicked, stopped at the store, and bought some double chocolate ice cream.  That settled me down a bit.
There was a light rain.
When I got home, it was fairly late.  I poured a whiskey and turned on a sailing video on YouTube about a single handed sailor who really sails his boat.  I have been falling to sleep to his videos nightly.  But I remembered the ice cream.
That may have been a mistake.  I should amend my first sentence.
Then another scotch.  I called out to Alexa, "Harvest Moon."  Hence the Neil Young.  And my heart was fairly breaking.
Yearning, too.
I went out to see if the clouds had parted, and surely, there above the house was the Tropical Harvest Moon, that old last moon of summer.  I grabbed a camera.
Back inside, I pulled out the uke that Q had sent me and crooned.
When I put it down, I listened to this.
Wow.  I always love the old stuff.
And that is where we get to the precipice.  First, I sent some music to friends, but it wasn't enough, and the whiskey soon had me making a late night post to the blog.  O.K.  Nothing bad there.  But as I listened to the Boswell Sisters again and then watched the Neil Young video another time, I came this close--[]--to sending those songs to old girlfriends.  Heart in throat.
I hesitated, then got sleepy.  Crisis avoided.  I went to bed.
I lay me down and slept.  But my sleep was uneasy.  I dreamed almost consciously, a disturbing dream of an old girlfriend, maybe, who had brought a girl who loved me that I had never loved back to the place I was staying in NYC.  She was mad now, insane, lips white and dry, face withered. . . . Etc.  I had to leave.  I went out into the street.  Nothing better happened after that.  I had not forgotten the moon.
This morning what had occurred last night was a bit of a fog.  The real and the dreamed commingled for a while.  I don't know.  I remember watching a biography of Alister Crowley at one point last night.  All that Golden Dawn stuff, the opium. . . .  But as the fog cleared, I realized that I had in some heroic way managed to dodge the bullet.  In the past, I'm sure I would have sent those videos to old girlfriends.  I'd had my finger on the trigger, but it was o.k.  My gun and I stood down.  There would be no consequences to face this morning.
It looks like the morning will be clear.  Perhaps I will take a few photos with the big cameras.  This afternoon I am taking them in to the camera doctor to have them checked.  I just got two boxes of glass plates yesterday and I don't want to keep f'ing them up.  It is just too expensive.
But you know. . . what is wrong with digital?  My big old Canon sure gave me a good picture last night.
Posted by cafe selavy at 8:54 AM