Halloween In the Time of Covid: Pt. 2 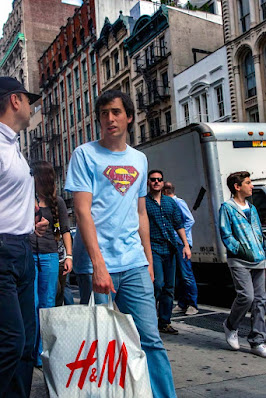 I had a girlfriend who believed she had powers.  She was into horoscopes and vortexes.  I think she's put some Halloween voodoo on me.  I woke in the night with a pain in my hip.  When I got out of bed, I could barely stand.  I had tears in my eyes limping from the bedroom to the kitchen.  Standing hurt.  Sitting hurt.  Lying down hurt.  She's definitely put some bad JuJu on me.

I don't.  It is nonsense.  And my disbelief at her wonderment for the metaphysical was a sore spot.  This morning it lies just above my hip on the right side.

That's what I get for doing yoga.  My back and hips have been bothering me quite a bit, so yesterday I Googled "stretches for back and hips" and found something gentle but thorough, so I did them before I walked.  I took a three mile stroll that brought me home via the Boulevard where all the stores were giving out candy to trick or treaters.  There was even something going on for the kiddoos in the park.  Costumed children were everywhere.

And some adults.  Too many, I would say.  I hope you haven't been invited to any costume parties.  I do.  Adults shouldn't be dressing up for Halloween,  I know some of you need cosplay for your sex lives, and I am open minded.  I watched "Eyes Wide Shut."  But truly, all I can remember of that horrible movie are the naked Nicole Kidman scenes.  And that, my friends, was quite a costume.

As I say, I am open minded about things, however.  My girlfriend liked to dress up for Halloween, too.  I guess I was disappointing in that department.  Among many, we would have to assume.  Otherwise. . . .

I guess my orange hair might qualify as a costume, however.  That and my hideous girth.  To wit: yesterday I began my diet.  I had no breakfast breads with coffee.  I ate no breakfast.  And I planned to drink no whiskey.  But by afternoon, I was firmly planted at the Cafe Strange with a glass of wine, after which I went to my mother's and had a beer.  Then wine with dinner.  Then, at home, a cigar and a whiskey.

I guess I'll just go the way of Brando and Nicholson.  Except for the money part.

My art dealer was a few towns away last night.  She kept sending me photos of the party that was going on all over town.  Music and costumes.  It is a college town and a redneck town, so yea.  It made me think of my days at the University and the Halloween Ball that took place there.  My god. . . I just wanted to go back last night.  What fun.  That was the last time I wore a Halloween costume.

After stretching and walking yesterday, I came home and did a little "Yoga with Adrianne" on YouTube.  I need to find out if that is what did me in.  How?  Oh. . . I will do it again.

That boy in the Superman t-shirt seems to have all the costuming a grown man might need.