And Then It Was Done 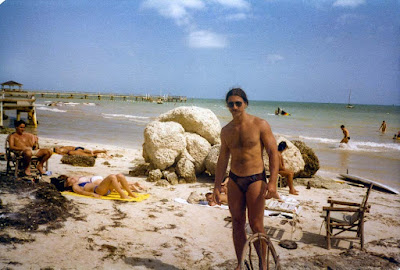 My dreams have been unusually clear.  I've had this vivid dream that has continued over a series of holiday nights.  There is a girl.  Of course.  But though this girl in my dream is vivid, not some murky, shadowy figure, she is new to me.  I mean, she is not someone who I've known in my waking life.  But I know the shape of her lips, the way her eyes don't lie, the curve of her breasts and of her beautiful behind.  She is young and she is sweet and she is beautiful. . . and she is in love with me.  And in the dream, everything is going to be fun just like it used to be.  Used to be?  Yes, you know, as happy as you dreamed life would be when you were young.

It is the vividness and the recurrence of this figure I am reporting on.  That and on the disappointment of waking up.  The dreams of an old man, I guess.

I am cursed, of course.  My father used to tell me when I was a kid and wanted him to take me someplace like a professional wrestling match or some other highfalutin event, "Jesus Christ kid.  Save something for when you get older.  You're going to have done it all by then.'  Old dad didn't have it in him to take me, I guess.  He was bullshitting, of course.  There is no way to do it all.  And all I want to do is to do it again and again over and over forever.

It is the waking that's the hardest.

Waking today, I realized it was over.  The Christmas That Wasn't.  What day was it?  When Christmas Eve falls on a Friday night and you have Christmas on Saturday, it is difficult to remember what day you are in.  It is Sunday, of course, the end of it all.

I still felt bad yesterday.  I went to my mother's midmorning.  I just got in the car and drove over after coffee.  I would rather have gone back to bed.  When I got to my mother's, she was feeling miserable, too. Her broken shoulder was giving her much pain.  I convinced her to take one of the hydrocodone tablets the doctor prescribed for her on her last visit.  We opened the scant few presents we bought, and she began to get sleepy.

"I think that pill is starting to kick in."

I went home and back to bed.  I got up in time to shower and drive back to my mother's house for the four o'clock dinner at the neighbors.

We were supposed to be the only ones there, but luckily, that was not the case.  Her daughter and son-in-law had surprised her by flying into town that day.  They were with some other relatives who picked them up at the airport.  Instead of four, there were eight of us.  Still, I talked too much.  I mean people just are not skilled at telling an interesting story, even when they think they have done some interesting things.  Her daughter barely spoke.  Her husband, a self-made rich guy, talked in the official voice of a sales executive about riding his bicycle and hiking and snowboarding.  He was just shy of my age and was fit.  And oh. . . were his stories straightforward.

"We used to hike with this older guy.  We were doing trails with him in his eighties.  He'd do the day trips with us.  He didn't go overnight any longer."

Scintillating tales such as that.

The other couple was fairly silent, too.  I guess I never mind telling a story, and everything you fuck up turns into an adventure which is pretty much all I do, so, at least in my mind, I have a lot of stories to tell.  I don't mind telling a story about crossing a wide boulevard, "cars coming from every direction, and just when you thought you were in the clear. . . !"

We managed dinner, but I had already explained to the hosts that neither my mother nor I were really feeling well, so before desert was served, we excused ourselves and made the wild and harrowing journey back across the street.  I had a bottle of Christmas scotch at my mother's, so I poured a drink and we recapped the day and the night.  She was ready for another pill and I was ready for my big leather couch.

And that was Christmas.

Most of the aches and misery from the booster shot seem to have diminished, but I still have a bit of dizziness that disturbs me.  I will try to move more today and see how I feel.  I will develop some film from my new camera today, too.  Oh. . . I don't know if I told you, but that $35 camera was a real steal.  Once I put a new battery in it, it worked like a charm.  That was my Christmas present to myself. . . a really good one.  The other one arrives today--the sailor's shirt.  That one cost many times more than the camera and will cause me anguish rather than joy, I predict.

That picture at the top is around this time of year in Key West from the wayback, somewhere between Christmas and the days after New Year.  Just to make those of you in some hideous Wonderland of Winter jealous.  I may head down to the keys in the next week or so.  That is what I tell myself.  Probably not, however.  Some of my friends will deride me if I don't, I know.  And I will go someplace.  I am sure of it.  I am pretty sure.  Maybe.

But I am fearful of leaving my bed.  What if I do and that young girl does not return to me?  Oh. . . I wish you could meet her. 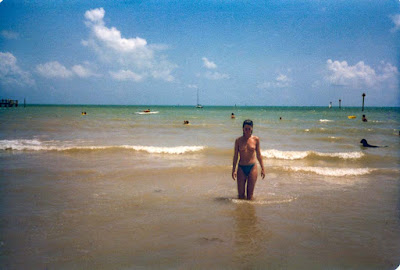