Freedom of the Hills 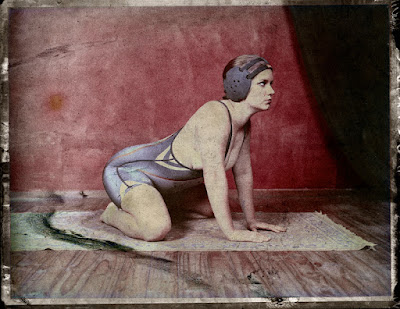 I guess I forgot to tell you that, after much consideration (as they say in the Times), I've decided not to publish my book with the online press I chose.  I don't think I will, anyway.  It depends on what I find the cost to be with other publishers.  But after looking at the book many times, I just don't think the color quality is right.  Everything looks pushed a bit toward the reds.  Anyway, that book is not in the immediate offing.  Again, though, I may change my mind.

This image is from the long ago.  She was a feminist painter.  She was great, tough as nails.  She wrestled on the boys team in high school and was a power lifter in college.  She was definitely body positive.  She celebrated her body as she did other women's.  Hers was a less repressive feminism, I guess.  She lived far away but came to the studio many times.  We wrote one another for a long time, but you know how that thing goes.  Eventually there is just too much time between emails and not enough to say.

I wish I had gotten one of her paintings.

I am pretty much done with "the news," but I still read headlines every morning.  In most cases, the article says little more.  I never read a story whose tagline is a question, and I've given up reading what used to be called op-eds.  I've decided they, by and large, neither enlighten nor delight me.  But this morning, one tagline got me to read (link).  If you think life is good for Americans, this article will be shocking.  If, however, you are anything like me, you will nod your head in recognition.  The religious among you might say it is a crisis of faith.  Skeptics might cry we are buried in too much science.  What is most striking, however, is the age of the people who are killing themselves.  Kids, really.  One can understand an old person's concern with suffering and the inevitable, but WTF--kids?  You know there is something terrible going on.  Is it parenting?  Is it the schools?  Poverty?  The 24 hour news cycle?  As the article implicates, taking away drugs and banning social sites isn't going to fix the problem.  Just what is making us all so terribly unhappy (the royal "us" of course as you may be the lark in the bunch)?

Last night I watched a documentary on Netflix that was a real eye-popper (link) about a kid who climbs "unclimbable" mountains alone without telling anyone.  I was attracted to the kid because he was climbing "dirt bag" style.  He was not one of the famous, sponsored faces of climbing.  He was like those kids who started climbing in Yosemite in the '60s, eating out of garbage cans, sleeping in tents, living out of cars, tough as nails.  I'd met and gotten to know a lot of them back when I was "climbing."  They were all a little nutty, but they seemed something else, too.  This kid reminded me of all that.  But the things he was doing--holy smoke--it is difficult to say whether he had a death wish or not.  I don't want to give away the ending of the doc for those of you who want to watch it, but it makes one wonder what it takes to make some people happy.

Poppies, I say!  Fields and fields of poppies!

I have had to write lying down in bed this morning.  Too much pain in sitting.  Standing was next to impossible.  This is getting to be a bother about which there is nothing to do but keep stretching and exercising and hoping.

I love the idea of that kid climbing impossible mountains without ginning up press about it.  It reminds me of Vivian Maier making all those photographs she never exhibited.  That anyone can do that now in the age of FaceBook, Twitter, TikTok, and the general desire to be rich and famous is just that much more appealing.  I am sick of those social media big dental smiles and inane YouTube videos.  I prefer the TikTok dance videos Q sends me.  They are brief and just as dumb as they could be.  God love 'em.

I won't talk about the Epstein trail of Maxwell today.  The press is Woke, Ghislane is guilty, and now all we need is a conviction.  The defense attorneys, according to every "unbiased" article I read, are evil-doers who "blame the victims" by questioning their very questionable behavior.  Apparently, Maxwell's only defense should be "guilty!"  But I won't talk about it.  I won't.  What is it that c.c. calls it?  An auto de fe?

Well, I'm pretty certain that sex is evil--especially for the purpose of reproduction.  Pleasure is sin and comedy is the tool of the devil.  If people would just quit fucking around, we'd have better roads and bridges, our drinking water would be pure, and we wouldn't need counselors.

But as I've said, I am writing through pain today.  I'm sure it colors my perceptions.