A Character in an Elliot Poem 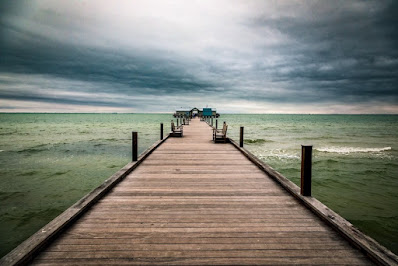 A lousy, rather ominous morning gave way to a most beautiful day--the bluest of skies, mild temperatures, and the hint of a pleasant breeze.  Truly, the day was magnificent.

I spent it alone.

As afternoon approached, I took myself to the gym.  I was woozy having concocted a most weird buzz the night before without intent.  Wine, margaritas, whiskey, and an edible.  I needed numbing, it seems, but I am not much good at such things.  Maybe it was that, or perhaps it was just some psychic thing, but none of me was connected.  I wandered about the house, head muddled, limbs detached.

Having eaten nothing but a grapefruit and some pistachio nuts, I thought I might have lunch.  But a shower and a nap put me into mid-afternoon, and my mother was making dinner for me in the early evening.  I was, to use a nonsense word, kerflumpt.

I heard a racket outside my kitchen window, and went to see what it was.  A thousand, nay, a million crows had descended into my camphor trees taking turns at the berry feast. Berries were dropping audibly on my car as was the crow poop, but it was too amazing a sight to disturb.  This went on for a seeming eternity, then suddenly, the crow mob exploded into space.  The sky blackened as the birds took noisy flight.

Then I saw the reason.  Five, maybe six hawks were circling high above.  For many minutes, stragglers of the Crow Clan cried and chased the flock that was moving quickly to the northeast.  Then all that was left were the lofty hawks playing in the updrafts far above.

I decided to pour a scotch and smoke a cheroot before I left for mothers, and that is where I am now, sitting in the waning cool loveliness of the day.

It is my day, gorgeous and empty.  I will have dinner soon and come home and try not to think.

Next week. . . perhaps I will regain some equilibrium and a sense of productivity.

I've never been one much for birthdays.  Mine have almost always sucked.  It is me, I'm certain.  There is something spoiled in me, perhaps, or, what I really think, something that was spoiled for me.  No matter--birthdays, my own and others, are always traumatic days.

I've never been one much for omens, you know?  I don't believe in such things. . . generally.  But those crows?  What is one to make of such a vision?

Dinner with mother and my cousin was a roast with potatoes and carrots.  There was a small, store bought carrot cake, too.  After dinner, I came back to my house and waited for miracles that never arrived.

It is a new morning, cold and bright.  And now, as I have promised myself, I must get on with things.  "Things."  It is an encompassing word.  I read my horoscope for the next year yesterday.  None of my desires were in it.  It seems it will be a practical year.  Why did I read it?  The desperate go strange places looking for hope.  But yes, I need to be practical.  There is much that should be done.

Often, however, I just don't feel myself the man to do it.

The lawn trucks are busy long before the official eight o'clock hour.  The cat paces the cold deck though she has already been fed. I am the lazy one, a sad, fat cat ready to curl up and close its eyes.  I feel myself a character in some T.S. Elliot poem.