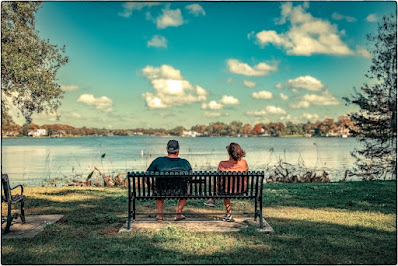 I had trouble choosing a photo for today's post.  I have so many dire, dour photographs that the pretty ones just get overwhelmed.  I did not want a bummer of a photo today.  I need a little sunshine and fresh air and the general mental wellbeing that it can often bring.  The maids came yesterday.  I got my car cleaned.  I will take a walk to the Boulevard and window gaze.  I might buy myself a pastry.  Hell, I may ride my bicycle.

I just feel like being chipper in a '50s way, in a Dick and Jane way with no irony, no sarcasm, no hidden meanings.  Maybe I'll binge watch "Leave It to Beaver" or "The Donna Read Show."  I never enjoyed "Father Knows Best" when I was a kid.  That fellow who became Dr. Welby later always creeped me out.

Let me start with a few notes and observations.  My mother called me yesterday morning to tell me she saw a cat in her backyard.  Now my mother goes Full Hillbilly about cats.  She doesn't want them in her yard.  She says they bury their poop in the flower beds and you end up with fungus, etc.  So she hisses at them to make them run away.  She was hissing at this particular cat, however, and it wasn't moving, so she stepped into the backyard to chase it away.  Only it wasn't a cat.  It was a black and white rabbit with big floppy ears.  And it hopped right over to her, so she went into the house, she said, and got some lettuce and fed it to the rabbit.  After a bit, the rabbit hopped through a hole in the fence and went around to the front yard.  My mother went out and sat with it for a long while.

She called to tell me about it.  Maybe I should get her a rabbit.

When I went over in the afternoon, she said the repairman came over that day and took some measurements of a window my mother wants replaced.  He is a fellow I know from the gym who happens to live in my mother's neighborhood.  My mother said his wife came with him.  She asked my mother if she had seen the flying squirrels yet.  She said they are in the neighborhood and she told my mother they make a high pitched chirping sound like a songbird.  As my mother and I sat out in the afternoon, we heard the chirping.  I've never seen a flying squirrel in my own home state, so I was looking very carefully at the trees to see if I could find one, but we were only able to hear them.

"What happens if they fall?" my mother asked.  "Can they fly back up into the tree?"

That was the look I gave her.

I had a gazpacho and ceviche lunch.  It was fine.

Talk continued amongst the group about that photo sent out from happy hour the day before, so I sent them this.

It was only later that I sent them this.

I told them that Mickey Rourke's "The Wrestler" was more apropos.

I got no responses.

Mickey and I are the same size and the same age.  I wanted to challenge him to a boxing match when he was boxing.  I watched him.  He wasn't any good at all and he was fighting bums.  I was sure I could take him.  We shared a girlfriend for awhile.  Sort of.  Neither of us dated her for very long.  But after she left town and was living in NYC again, she told me that Mickey reminded her of me.  She said I'd like him.  Whatever.  That's my Mickey and Me story.

But look what I've done.  I've descended into a less than Dick and Jane world.  Yikes.  Let's swim back to the top.

The hummingbirds have been around my garden a lot lately.  I will need to trim it back now so that it can get a fresh spring growth.  I'll put some birdseed in the feeders, too.  It is time to mulch the driveways once again, and I MUST do something about the deck.  I need to do this soon so that when we switch back to DST in a couple weeks and the days stay long again, I can sit out and watch it all without feeling that everything is a wreck.

It is supposed to be subtly profound.

Oh. . . and I've come across a version of a song I love by a group I'd never heard of before.  How can there be so many things I do not know?  No matter.  Here it is.  It will get your morning off to a happy start, too.