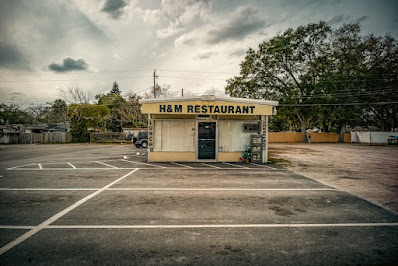 I started a post yesterday that was a sad look into the interior of my skull.  I knew it was well written at the time, and I was right.  But. . .  I think publishing it would be an irrevocable choice.

I am not quite as "mad" this morning, so we will go for the modulated entree.

"I'll have the poached chicken with the creamed corn."

Let's just back this shit up to the day I took this picture.  That was on Wednesday, I believe.  It was the last photograph I took leaving Grit City.  I drove by it on the highway home, then half a mile down the road, turned around and went back to take the photograph.

On Thursday, I downloaded the photos and had a look.  The day seemed a photographic waste of time.  I was terribly disappointed in what I had done.  But, I told myself, one must try.  Thursday night was drinks with the famous German filmmaker.

Friday was calamari in the afternoon and sushi for dinner.  I was still feeling funky.  The tenant came by to tell me she was leaving town after I had finished eating.  I was watching some documentary on YouTube--I don't remember what now--but our conversation turned to Peter Beard.  That led me to search for a clip I had seen once with Mary Hemingway and Peter at a reception.  I tried a search, but didn't find it.  I did find, however, the documentary "That Summer" which I ended up watching when the tenant had gone.  The film turned out to be the documentary Beard and Lee Radziwill had begun about Radziwill's fallen cousins at Grey Gardens in the Hamptons.  After that, I watched some other videos on Big and Little Edie including this one.

Now if you have never watched the documentary "Grey Gardens" then you are one of the uninitiated.  There have been ever so many spinoffs and follow up documentaries made on the Beales, including a movie starring Jessica Lang and Drew Barrymore which is surprisingly good though it mirrors the documentary almost exactly which makes you wonder even as you marvel at the thing.  But once you're in, you swallow the hook.  There is no shaking it after that.

While watching the video, I began to weep.

Saturday morning, I had a complete breakdown, nothing like I have ever experienced.  That is the part we will leave alone here and now.  There is only so far I am prepared to go in this confessional.  But it was debilitating.  I went back to bed for a long, long time.

In the afternoon, I ventured out to Trader Joe's.  I wanted treats.  I knew I couldn't manage to prepare a usual meal, so I bought a frozen pizza, some cookies and candy.

After dinner, I watched more YouTube videos of the Beales.  Eventually Big Edie dies and Little Edie sells Gray Gardens and moves to New York City.  Finally, then in her fifties, she performs her act in a nightclub in the city, but time has moved on and her particular form of kitsch is not well received.  Edie has missed her window.  She moves to a condo on the east coast of South Florida where she lives alone and swims every day.  That same spirit remains until the end.

Seriously disturbed, I felt the need to make something.

Then. . . I don't know. . . sometimes we just do stupid, stupid things.  Maybe it was being in Grit City, maybe it was the Beals, one of Ili's and my favorite things.  I made a copy of Big Edie calling for Little Edie, something we used to do when one of us wanted the other.

I was unbalanced, I know.  Maybe it was the drink, maybe something else.

I stumbled upon Beatles studio recordings.  I was fascinated.  I brought out my guitar and played along.  I sang far too late into the night.

The next morning, the madness still clung to me like a barnacle.  My body ached.  I could not make myself happy.  Maybe, I thought for the hundredth time, I had Covid.  More than that, though, I felt myself dying.  I went back to bed.  My anxiety was too much.

By mid afternoon, I had not eaten.  There were no returned texts.  Even the fashion expert had quit writing.  I made a bowl of lentil soup and opened a beer, and then I called my mother.  She was making a small dinner for us.  I don't know how, but I made it over.  I performed well enough, but I told my mother I didn't feel well.  I confessed a few things, but not everything, of course.  With dinner, however, I felt a bit better

We ate outside, then I sat until night began to fall. I drove home.  I poured a drink.  I wanted to watch the Beatles "Get Back," and I thought maybe I could get it on Apple T.V.  Apparently, I have not used Apple T.V. for at least two years, for when I turned it on, it wanted Ili to sign in with her password.

"You've got to be shitting me?" I thought.  I had no idea what the password was.  I fucked around in settings until my own account came up, but it still wanted a password.  I couldn't remember it.  I tried numerous things until I realized that I had a new iTunes sign in.  I used that and finally got the app to work.  But that was the end of it.  I couldn't watch "Get Back" without signing up for The Disney Channel.  For a monthly fee.

I unplugged Apple TV.  It is worthless unless you want to sign up for monthly fees with everything from Peacock to Hulu.  Apple has definitely gone bad.

I think that's how you say it.

I went back to my Amazon Firestick and watched "The Marvelous Mrs. Maisel."

And then I made this.

I tried to upload it to YouTube so I could post it here, but I was not allowed.  This is the only place you will hear this version.  I concocted it myself.