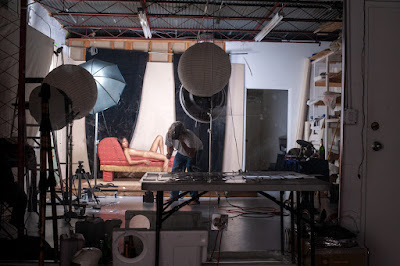 I fall increasingly out of love with the Impressionist.  Pissarro, Renoir, and Monet were pals.  They painted in the same studio for many years, or so I've learned.  They influenced one another, especially in the use of rough brush strokes.  Edward Hopper considered himself an Impressionist and you know how I feel about his work.  Perhaps, though, his paintings appeals to me more because he was influenced by the photographer Eugene Atget.  There is certainly a more "photographic feel" to his paintings than to the others.  I think, however, that it is the empty spaces occupying a Hopper painting that is most attractive. Monet painted water.  Hopper painted air.

What they all shared, though, was the desire to paint outdoors, en plein air.  They eschewed the walls of the studio by and large.

Why don't I do that?

I learned last night that the thing that made outdoor painting possible was the invention of paint tubes.  An American working at Windsor Newton invented them.  There was that and the making of the portable paint kit.  Painters were able to get out of town with a minimum of effort.  There was also the invention of the flat paint brush.  Before the ferule, the flat metal part that holds the bristles, all paint brushes were round.

Out of necessity, I am trying to be en plein air photographer.  My last trip, however, produced little.  I want my studio back.

But I had a spectacular deal.  It was cheap.  There are no cheap spaces now.  And, of course, economics had as much to do with Impressionism as innovation did.  They just couldn't afford the cost of a studio.  And so. . . they rebelled.

Perhaps I'll rebel, too.  I'll accept new technology.  I will use only my iPhone as a landscape camera.  I could do it, I think.  Just give up other cameras entirely.

But I really loved that studio.  If I can, I will get one again.  If I had land, I would build one.

I am all nonsense here.

I'll watch more YouTube tonight and change my mind as I come to the later Impressionists.  I'll fall back in love again.