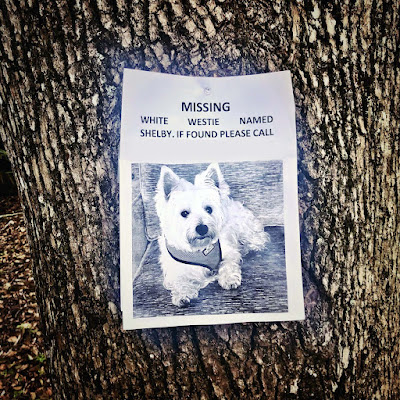 Shelby went missing.  She is the sweetest dog in the world.  And, of course, she loves me.  She is owned by the doctor/lawyer couple across the street, two of the nicest people in the world, too.  A few years ago, Shelby got out on Christmas Eve and came over to my house.  She sat on my mother's lap for about an hour, a perfect little lady.  We fed her treats, of course.  Once, while I was dining outside, I gave her salmon.  Her owners and their grown kids say she won't walk past my house without seeing if I am there.

So I was heartbroken to think she was gone.  All day long, I've heard people from all over the neighborhood calling for Shelby.  I was sitting out on my new deck when a woman walked by carrying her.  She was looking at the flyer for a number to call.  I walked over and showed her where Shelby lived.

For the rest of the late afternoon, as people walked by, they were calling for Shelby, and I told them she'd been found.

I tried doing my taxes on Turbo Tax's free site yesterday.  I got scared and gave up.  I think they make the free site scary so you will use their for-pay site.  There are too many questions I just couldn't answer.

After writing yesterday's blog piece, I thought a lot about Scott Hall and the crazy shit that happened over the years.  I've started writing notes and sketches for a book called "Gym" a number of times.  Lizard, Spike, Rocky, Dresser, Stormy. . . crooked cops, strange doctors, hustlers, rich gay supporters. . . I don't know.  For a long time I thought I would get killed if I wrote it, but most of the people are or are probably dead by now.  Now. . . well. . . I seem to be too undisciplined.  Maybe if I set aside two hours every day just to work on that. . . .

What always befuddled me is the amount of money Scott made from wrestling.  No, what befuddled me is that people pay money to see it.  I guess it is like going to the theater for some people.  Everyone knows it is a gag, but they don't care.  Wrestlers go to school to learn how to walk on the mat.  It is bouncy and spongey made to soften falls, nothing like a boxing ring.  They learn how to grab another wrestler with soft hands.  They learn how to throw fake punches.  Basically, they learn how not to injure or get injured.  Still, the toll on a wrestler's body is great.  Everyone gets hurt from time to time.  Rarely, if wrestlers don't like one another, the shit becomes real.

"They have to know they can't bully you," Scott said.  "If they think they can hurt you, they will.  If you are out, they get more matches.  There are only so many to go around."

That, of course, is for wrestlers on the way up.  Once you have made it, you don't get fucked with as much.  You are just too valuable to the company.

When he was a newcomer in the WWC, he got to participate in a Rumble Royale, a match that puts a bunch of wrestlers are in the ring at once, and the last one left inside the ring is the winner.  The Steiner Brothers, who were both collegiate wrestling champions, were also in the ring.  Scott said they were scary because they really knew how to hurt you.  That night, Scott, who was much bigger than either of them, grabbed Rick Steiner in a full nelson and said, "Try to get out of this little man."  He said he felt Steiner giggle which scared the shit out of him, and her ran to the ring post and grabbed hold.  When Rick came after him, he just screamed, "Leave me alone."

I don't think Scott was the winner that night.

But there are crazier stories I would be afraid to tell.  Sex, drugs, and rock and roll.

Shelby was found way down the street toward the lake.  How dumb is that dog not to be able to find her way home?  Maybe, when hunger truly set in, she would have headed that way, but I think she is probably just a ditz.

Good old Shelby.  Crisis avoided. The neighborhood is at ease.