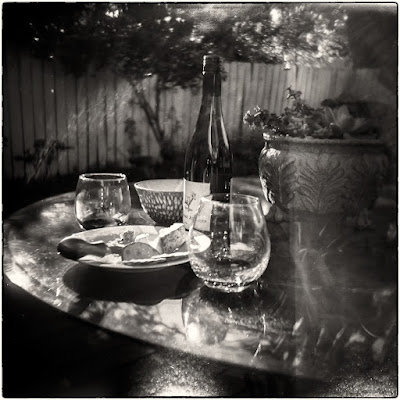 Oh, man. . . my head hurts.  I went out with the kids from the factory last night.  It was fun, but my life is much quieter than that.  I slept late, and when I finally got out of bed, I got a call from one of the former factory workers who got a better factory job in another state.  She is part of the text group that we all use, and she was in touch with us last night.  She knew what was going on.  And so. . . she called to see how I was doing.

"You sound sick," she said.

I did.  My throat was very froggy.  It wasn't the drinks so much as the activity, I think.  You spend a lot of energy with a group at a bar for many hours.  Nerve ends tingle, your wit is actively engaged.  You scream to be heard over the music and the chatter and the noise.  You don't realize it, but it takes its toll.

It took its toll.

I will have to give my retiree's work life a break.  Since Saturday, I've worked every day--fourteen yards of mulch, two gardens, rerouting my computer/library, and painting the apartment stairs.

However, today is World Cocktail Day!  AND it is Friday 13! What horrors are upon us?

As Uncle Willy says in "The Philadelphia Story," "This is one of those days the pages of history teaches us is best spent lying in bed."

When I got home, it was late.  As I got out of the car, however, I heard the mewing of the cat.  I couldn't see her, and she didn't sound near.  I went in, got some food, and put it in her bowl, then lit a cheroot and poured a glass of whiskey and sat out while she ate.  She was lonesome, I think.  When she finished eating, she curled up on the mat in front of my kitchen door.  I couldn't enter the house without running her off, so I sat out under the stars and moonlight and waited for her to move.  Eventually I went in and poured another drink, turned on the t.v., and fell asleep.  I woke up sometime after one and went to bed.

I'm taking the weekend off.  A working man with a true weekend.

O.K.  I'd better post.  I am being interrupted by a hundred texts.  I guess the night was a success.