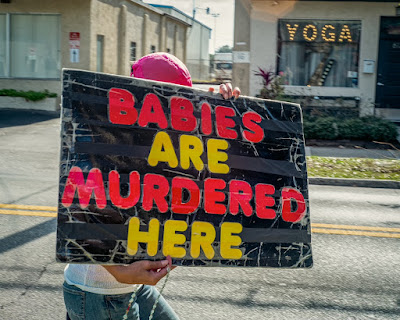 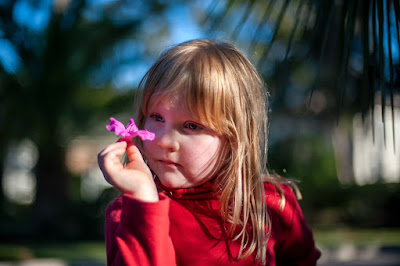 Have you heard about the Supreme Court Ruling on Roe vs. Wade?  No?  Oh, well, let me tell you. . . life is special.  Every life is precious.
I had to take my mother to a doctor's appointment yesterday at 2:45.  That's what I thought.  I worked out and then sat around and shot the shit with the "boys" for a while.  When I left, I was on my way to Whole Foods to pick up stuff for lunch, then home to shower and eat before I picked up mom.  I decided to call her when I left the gym.  Good thing I did.
"My appointment's at 12:45," she said.  It was 12:30.  I turned around and drove to her house, grubby, grungey, and stinky.
"You've been telling me 2:45 for a week.  WTF?"
When we got to the office, it was the wrong one.  My mother starting getting angry.
"I called here and they told me that this is the only office.  The woman told me I was scheduled here."
I knew this wasn't right.  She has another doctor's appointment next Friday.  That is the office she called.
"Well. . . the doctor will hold an appointment for you if you want to go to the other office."
The office was across town.  My mother was frustrated.
"Come on, let's just go and get this over with."
So we traversed the busy city to get to the other side.
Her doctor, an ENT specialist, is a real beauty.  Some years ago, when she was first hired straight out of the box, my heart fell when she walked into the room--knee boots, short skirt, long, dark hair, and the face of an angelic athlete.  I've never gotten the vision out of my head.  Of course I would drive my mother across town to see her. . . again.
She wore scrubs and a mask.  But she found nothing wrong with my mother's ear.  Mom's hearing is good, too.
It was three-thirty when I dropped my mother back at her house.  I had consumed nothing but coffee.  I stopped at the grocery store to get vegetables to roast.  Lots of them.  And what the hell--some wine, too.  I could have a glass of wine.
After a hell of a lot of chopping a monsoon broke outside.  There would be no grilling tonight.  I put the vegetables in a cast iron pot and cooked them in the oven.
Oops.  I was already several glasses of wine in.
I went to the living room and turned on my Apple Music channel.  Mine.  The one named after me.  There are times when it thrills me.  Last night was one.  I started pulling photo books out of the piles on the floor.  I was looking for inspiration.  I wanted to see large format photographs of people framed head to toe.  I was looking at the photographs in ways I'd never looked before, guessing at the large format focal lengths, aperture openings, etc.  I looked at clarity and/or bokeh.
By six thirty, the vegetables were done.  I spooned them over the jasmine rice I'd cooked.  More wine and the news.  Oh, did you hear?  Yea, it's been all over the news.  Baby killers are getting run out of town. 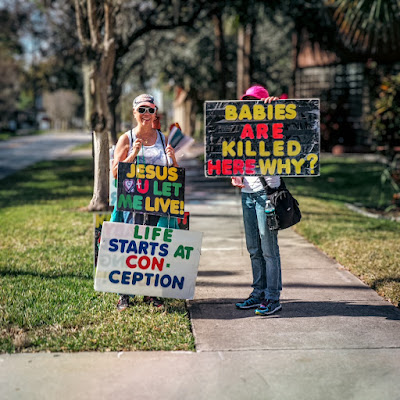 You boys better keep your peter in your pants.  You might end up with a lifetime of something you don't want.  Just stock up on your Clarence Thomas selection of sick porn movies and keep to yourself.  What?  Yea, there's a list of them somewhere.  I'm sure you can Google it.
This ruling seems counterproductive to the desires of the extreme right to me, though.  As I've pointed out in other posts, minorities have more abortions than do whites.  White Power people are just going to  to be  growingly outnumbered. . . and outvoted.  Maybe, however, they plan to continue the retroactive assault rifle abortions.
Or so I told my mom. 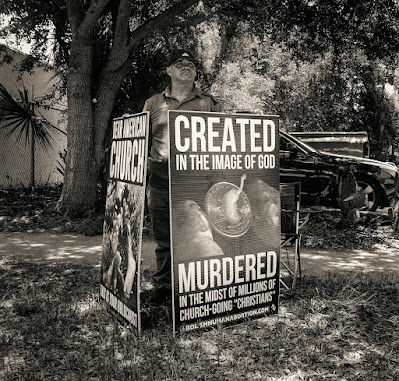 My mother is against abortion.  I told her she needn't worry.  But she is of the all life is precious camp.  I told her her hillbilly relatives' weren't.  The world would be a better place if most of them had been aborted, I said. They are just a bunch of tatted up drug retard criminals who never contributed anything to the social good.  They are nothing but drains on our society.
She snorted.  She didn't argue.
But hey--just look at the signs of these anti-abortionists.  Apparently, they couldn't pass a quiz on the difference between a zygote, an embryo, a fetus, and child.  I don't know what that image of god is on that last person's sign, but it scares the hell out of me.
It is cloudy this morning, and the forecast is for rain.  Some of my photo hopes are dashed, but it could be o.k.  I'll do something, then I'll do nothing.  I'll listen to music this afternoon and read and drink hot tea.  If it is clear this evening, I will go to a bar and do some MDMA and dance until dawn.
Posted by cafe selavy at 8:28 AM