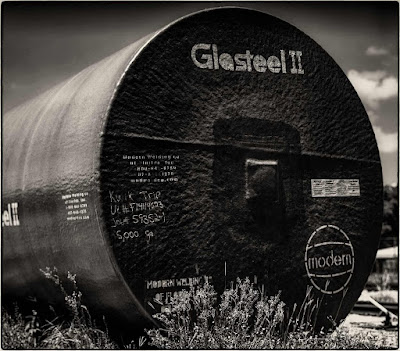 Maybe my series shouldn't be Work and Leisure.  Rather, I could have the Organic and the Manufactured. I went out yesterday to finish off the many partial rolls of film I have in a variety of cameras.  I did manage to finish one 35mm and one 6x6 roll.  But I had my Liberator in the car as well.  And I couldn't help myself. I found this monster sitting in a field next to the railroad tracks.  Not one, but an entire row of them.  I took two photos with the Liberator, this one and one further back that framed the entire row.  When I got home, it was the 4x5 negatives that I developed first.  The one above came out.  The other, for unknown reasons, did not.  It appears that the film holder was not fully seated in the back of the camera and light leaked in.  I will have to go back.

I read something terrible today.  A study indicates that people who nap daily have a much higher chance of having high blood pressure, diabetes, and strokes.  I love napping every day.  But it is probably true that I am napping because I do not sleep well at night.  Apnea is likely killing me.  I will have to seriously consider becoming part man, part machine and having that electronic device that stimulates the throat when one begins to snore surgically implanted.  I, myself, will become part of the Organic and the Manufactured.

I also have believed I nap because I border on depression these last few years.  I don't know.  What I do know is that I need to quit reading these studies.  They depress me worse than the news does.  It seems that what all the findings have one thing in common: something will kill you, and depending on your age, sooner rather than later.

It just occurred to me that we can substitute "Trump" for "Spam" and we have his new campaign song.

It occurred to me and I can't get it out of my head until I share it with you.  Then you, too, can be cursed.

That's all I got.  That and a Wednesday hair appointment.  I may do something different.  The blonde became silver and really just looks gray now.  She said she was doing it on purpose, but it occurred to me that she is having the same supply problems as everyone else.  Maybe she can't get the chemicals to make me blond right now.  I heard her talking about not being able to get some things, and I am betting that is it.  Maybe I want a different cut, too.  I don't know.  That show "Selling Sunset" is making me shallow and stupid.  It is a hideous addiction, this show.  How did they ever get away with making it?