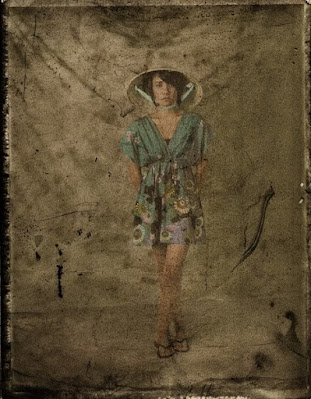 "It took more than one woman to change my name to Shanghai Willy."

Whew!  Yesterday was a whirlwind.  It ended with a trip to the cantina to see the gym boys.  To be fair, there was a woman there, too.  She does a crazy circus routine in the gym.  We all watch her in wonder and probably more.  I didn't recognize her out of her gym outfit, hair done, makeup, nice clothes. . . the works.  I am pretty sure she didn't mind attention.  But boys will be boys, as they used to say before the turn of the century, or maybe before The Kinks recorded "Lola."  The talk was loud and rough and she hung like a champ.  I believe she even enjoyed it.  But that is another story.

I didn't want to go.  I had a relapse of illness and just wanted to stay in my comfy clothes on the couch.  It seemed ridiculous to find clothes to wear out with near strangers.  At the last minute, though, I pulled out a pair of jeans that still fit, and old thermal t-shirt, Chucks, and a Patagonia down sweater.  I felt as if I were wearing a stage costume.

Most of the crowd was already there and drinking when I arrived.  Hoots and hollers at my approach, I was immediately asked what I wanted to drink.  My order of a margarita brought out the derisive boo-birds and suggestions that I get a little paper umbrella with it.

The drink was awful.  Margaritas are simple to make.  Cointreau, lime juice, and tequila.  Fucking that up is like fucking up breakfast.  I hadn't much faith in the dinner to come, but I was hungry, even with a bad belly.

I was wrong.  The dinner was awfully good, but the boys got a hoot out of me eating the tacos with a fork.

"You voted for Bernie Sanders, didn't you?  Look at him.  You know he's a liberal."

Seems I'm always the token hippie in the crowd.

"You dumb fucks.  Trump eats his Big Mac with a knife and fork.  I'm trying to be a Trumper."

The night went on, and one of the fellows ordered a round of tequila shots.  I had sworn to myself I wouldn't, but I did.  And by god, my belly straightened out right away.  I'm pretty sure there is nothing better for a bad belly than Mexican food and tequila.

One of the fellows is a radio dj.  Everyone seems to know him and his show.  I had to apologize to him before I asked him about it all.  I don't listen to commercial radio, I said, or commercial anything.

"Do you do shock jock stuff?"

"We used to do more of that when Howard Stern was big, but not so much now."

As the night went on, the more slings and arrows were unleashed.  Insults flew.  But he was really good and entertaining.  Nothing got over on him.

"He'll be using this stuff tomorrow," said one of the gyrmroids.

More shots arrived.  And more.  And fellows got drunk.  Not me, of course.  I got healthy.  But the stories got weirder and more aggressive.  Being "the liberal" of course, my own sexuality was called into question.

"Have you ever been with a tranny?"

I didn't get very far with that one.  Their form of weirdness is pretty shallow.

"Like Hunter S. Thompson said, it never got weird enough for me."

That was the last almost story of the night.

When the evening came to an end, the checks came with it, and the fellow buying the shots had a very large bill.  The tequilas were $30 each.  I'm not one to take advantage.  I always like to pay my tab, so I broke open my wallet and slid him a couple fifties.  Useless.  He wouldn't take it.  These guys are all republican money boys, own their own development and real estate companies.  You know the deal.  Still, I don't feel comfortable.  I asked the name of the tequila we were drinking.  I will buy him a bottle today.  Cash is crass, but nobody turns down a present.  I want to keep my tab clear.

I had planned to stay an hour.  When we staggered into the parking lot, it was late.  Warm bro hugs and fist bumps.  I had had a really good time.

"Nothing good ever happens after ten," I said as I headed to where I had parked up the street.  "But yea, thanks for the invitation.  It was fun."

Back home, it was time for bed.  I poured a scotch and checked my messages.  Q was pissed that I said he was successful in NYC.  I think.  I couldn't figure it out.  I told him that I just thought it made me seem cooler if I had successful friends.  Maybe I misunderstood his cryptic reply, though.  Maybe it was something else.

I guess I was jacked from the evening.  One more drink, I thought, and a little "Shanghai Express."  Oh, my. . . that film is gorgeous.  Watching it on my computer reminded me of watching movies on my computer with someone a long time ago.  Texts came in.  I'd pause the movie and respond.  Soon it was far too late to be watching a film.  I needed to sleep.

I think I dreamed I was on the train with Shanghai Lil.   The soundtrack was "Chinatown, My Chinatown."  So wrong.  But that's what happens when you spend an evening with a bad crowd.

For real. . . nothing good ever happens after midnight.