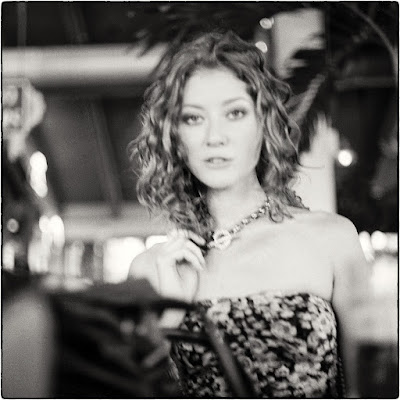 Sharp, well focused photographs are for the masses.  It is a bourgeois concept.  I used to keep a camera with me always.  Film.  It is a wonderful thing.  I liked shooting in bars and bodegas where the light was crummy and uncertain and sure to produce slightly blurry, atmospheric images.  When it was all film, there was no problem.  Today, though, when everyone has a tattle-tale digital or phone camera, the world is bland.

No, the world isn't bland.  People are.  Not all people, of course, but the great majority.  And they will have their way in the coning elections.  A devilishly dumb and corrupt government for the bland masses.

If we are clever and lucky, though, we will slip into nooks and crannies and live as if we were in the Weimar Republic.  We will read ungodly stuff and listen to "Kind of Blue" and make dinners of great delight.

And, if we are terribly lucky, there will be whiskey.

I will travel again just to see. Just because.  It is difficult.  I have all the luxuries in my home, a lifetime's collection.  There are 19th century rugs and antique pine cabinets of a similar age.  There is paraphernalia from my travels around the globe.  I have an expensive coffee maker and the whole beans I like, and there is a cabinet full of the best liquors.  There are giant leather couches and chairs and art from some wonderful people I have known.  Half a mile from my home is a wonderful boulevard.  My life, in toto, is enviable.

My new old friend has thrilled and killed me.  She has been the joy and bane of my existence.  My fault, of course, not hers.  Like Q, she lived in NYC and became famous.  These two shits have always made me feel somewhat provincial.  I have dated the rich and famous and have stayed in their penthouse apartments on the upper east side, but I never lived and achieved there.  I've climbed mountain peaks and slept in jungles with aborigines, but I have still felt myself a rube.  I am.  Me and C.C.  Rube City.  Don't want to piss you off friend, but we've talked about this and our hillbilly aspirations.  Peas in a pod.  We should have competed in the City That Never Sleeps.

I'm smart.  I've been written up in literary journals and rocked conferences 'round the world.  And yet. . .

But I can cook a bit and am good to my mother.  Even today on my walk on the Boulevard, women smiled and gave me the nod.  But who are they?  There is a hierarchy of which we are never supposed to speak.

The Paris Review is one.  Oh, god, to have been part and parcel of that crowd.  George Plimpton and I became somewhat pals, but I think it was only because I was at a high falutin literary affair at the Kennedy Library where everyone was someone.  We talked of doing a book together.  He was all for it.  He was so for it, he did a documentary about it without me.  Still, I liked old George, but I wonder if I could have made it at his parties (link).  I think so.  I've made it with some of the literati.

Q made it and my new old friend made it because they took the leap.  They took the chance.

Now, of course, they are ensconced somewhere else with baby-somethings in other towns with other careers.  In the end, they chose what "everyone" chooses.  As my republican friend said to me before I got married, "Do you want to end up like Brando?"

Yup.  I guess.  I've had a rich and entertaining life.  It has been, for this hillbilly boy, miraculous.  Few regrets, lots of love.

Still. . . everything good and wonderful in life makes me think of a girl I used to know.  What the fuck is that?

But memory is like a blurry picture, impressionistic, atmospheric.  Maybe all that is true.  Maybe some.  Maybe little.  What does it really matter?  Success is merely another bourgeois concept.