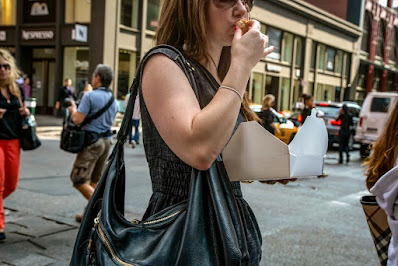 I'd been struggling with myself about reading "Down and Out in Paradise."  As you all know if you've been reading the blog, I was not a Tony fan.  I watched the show and read his books and thought they were better than o.k.  It was probably the adulation that he received that put me off.  A mediocre guy gets adored for being mediocre.  Maybe he was better than mediocre.  Maybe he was good.  But there was something about him that always put me off, which is a real strange thing since he always spoke so highly of me.

Yeah, I'm aware that my opinion of Bourdain is about as interesting as somebody in the grandstand heckling the visiting team.

"Hey buddy, why don't you get out there and play.  You know all about the game."

Give an asshole a microphone.

But I did admire Bourdain in death.  I mean, the fact that he was able to take his own life.  That is one hard-assed thing to do.  When the time comes. . . .

Last night, feeling better but not great, having eaten some soup and a couple eggs without any digestive problems, I thought I needed something light to read.  I didn't want to have to pay all that much attention looking for connected tropes and themes, etc.  I just wanted to read a report, a tale, an old Vanity Fair style tell-all.

You know, the sort of thing Bourdain himself wrote.

So I downloaded the book and gave it a go.  And holy smokes, I was smitten from the get-go.  This fellow Leerhsen can really write.  I'd read a review in The NY Times that said he wrote like it was still the '90s.  The reviewer was not giving a compliment.  But he may be right.  The book is quick and bold and full of colorful phrasing.  It might be called "masculine."  I mean, if we were still binary.  But I can see what the reviewer meant.  The writing style is almost a literal interpretation of the way Bourdain himself saw the world and tried to write before #MeToo (which has always made me wonder at his sustained popularity).

Many people have criticized the book for its tattle-tale style.  They lean into the fact that many of Bourdain's friends would not be interviewed.  But Leerhsen had an ace in the hole.  He had Bourdain's wife who was now sole owner of all Bourdain's material including letters, emails, and texts.  To me, the criticism would negate just about all biographies of writers like Woolf and Fitzgerald and Hemingway whom we've learned to love and hate and whose literary talents have been judged and misjudged by what has been revealed of their personal lives.

He was the epitome of cool, a sad-smiling Jersey boy who combined supremely high standards with the underappreciated art of not giving a shit in ways that seemed to excite both sexes. You wanted either to be him or to do him, especially if you’d heard the gossip about his gargantuan member. He had the best job (if you could call it that) in the world, the best life in the world, applauded wherever he went. Cigarettes, booze, and time all looked good on him. So the question is, how did he get to the point where he wanted to kill himself? How does that scenario even begin to make the slightest bit of sense? It all came down to the woman, or so the supposedly wise ones said. Darkly beautiful, you had to admit, and certainly no dummy, but trouble with a capital T, an old-fashioned femme fatale. Cocktail for cocktail, she could keep up with him all night long and then pull away like Man o’ War in the rosy-fingered homestretch. He loved that about her, that she was tough and independent and always thirsty; he loved that fresh mouth. “I’ve never felt like this about anyone before,” he told anyone within earshot. But her ballsiness also happened to be their biggest problem. Because for one thing it meant that she would screw anyone she pleased, sometimes, it was said, anyone within reach. Of course, he’d been around the block himself, and came from a world in which sex often didn’t mean much, but since he was head over heels for her and had big plans for the two of them, and was such an incurable romantic at heart, such a goddamn Jersey boy, even the possibility of her sleeping with other people mattered to the point of making him physically sick. So many long, tortuous calls to Rome from which he would stagger back to the day’s business pale and shaken, the people who’d been waiting around for him unable to look him in the eye. He could feel her slipping away. “Why don’t you just get on with your fucking life!” she had screamed at him one night. As one of his friends said, “A billion fucking broads in the world and he’s got to pick one who will take him or leave him!”

Leerhsen, Charles. Down and Out in Paradise: The Life of Anthony Bourdain (pp. 3-4). Simon & Schuster. Kindle Edition.

Pretty hard-boiled.  It reads something like a James Ellroy novel or maybe Raymond Chandler.  Yup.  Just what I was looking for.  I was in.

I texted that portion of the book to my fashion industry friend.  She's written for some big publications and has taught writing at my alma mater and was with the famous NYC international crowd for a long time, so I expected her to have an opinion about it.  She called it "soapy."  Well, hell yea.  I don't read People magazine, so I deserve a little fast action writing in my life.

She asked me how I was feeling, which was nice.  I've been feeling pretty awful about things and getting painfully ill has pushed me to the Existential precipice.  Where once I preferred my solitude, I now recoil from my isolation.  Maybe, like Bourdain, I think my salvation lies in some half-crazed beauty.  And then I think of The Bourdain Solution.

"The book," I told my friend, "is going to be of the 'tender hearted men, lonesome, sad, and blue' genre."  At least that is what I think having read only a bit of it.  Call me what you want, but I still like that stuff.  Everyone has been scared off writing it now.  That whole yearning for a "nation of two" by some macho emo romantic thing has been put to pasture.  But. . . there used to be such people.  Maybe there still are.  They have just been "disappeared," I think, scrubbed from the public imagination. . . perhaps rebranded under some less wholesome moniker.  Those who are left are like Japanese soldiers living alone on Pacific islands without ever knowing that the war was over.  Maybe they have all become incels.

I'll withhold final judgement until I have finished the book, but I have a feeling that Bourdain, who was formed in a world before social media, was consequently devoured by it.  Reading about yourself in light speed had to have deformed him in some way that those who have grown up with it would find it difficult to comprehend.  Being a rowdy raconteur ain't what it used to be.

The gray light before sunrise washes in.  Up early, I may go back to bed.  Just for a bit.  I will try the gym today and see how I hold up.  It's a brutal world.  One must be able to hold one's own. 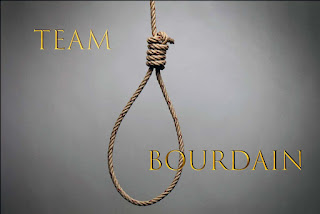 The thing to remember about Bourdain Day, though, is that it is mostly an outlet for his fans’ adoration, not a moment to conjure the historical person. You need more than a bottle of champagne to celebrate Bourdain Day; you also need the amnesia that alcohol brings. The inconvenient truth about Tony’s feel-good story, after all, is that its protagonist died by suicide. In the end, he was a source of hope for only so long before giving us a lesson in what happens when Emily Dickinson’s “thing with feathers” takes flight.

Leerhsen, Charles. Down and Out in Paradise: The Life of Anthony Bourdain (p. 20). Simon & Schuster. Kindle Edition.