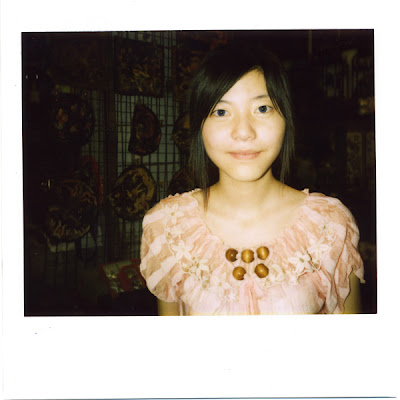 I came out of the Great Mosque n Xian at dusk one day and had a few minutes to rummage through a flea market before I had to get back on the bus. It was the most fascinating flea market I saw on the trip, but I didn't know that it would be the best at the time and I did not bother to buy the things I wanted thinking I would see them again at the next bazaar. I walked past an alleyway and saw an old bike that I wanted to photograph. As I was framing up the bike, a young girl asked me, "What are you doing?" I said I was taking a photograph of the bicycle. "Why?" she queried. I told her that it must be quite common to her but I didn't many things such as this old bike at home. She cocked her head and said laughing, "That bike is not old." She was a student at the university, and she ran one of the stalls in the market. We chatted a few moments before I asked if I could take her picture. Once again, the Polaroid drew quite a crowd. Suddenly a man ran up and started speaking to me excitedly in Mandarin. The young girl explained, "He wants you to wait. He wants you to take a photograph of my baby." Sure. He was gone quite a while, but when he returned, he had both the baby and the baby's grandmother with him. "Is this your husband?
i asked the girl. "No, he is my brother. I do not have a husband." I asked her if that was alright, if everything was OK. She told me yes. "You know, I am a student at the university. . . ." I left some Polaroids of the family with them. I have the email address of the fellow who owns the stall across from hers so that I can send her these copies. Mother and Daughter. 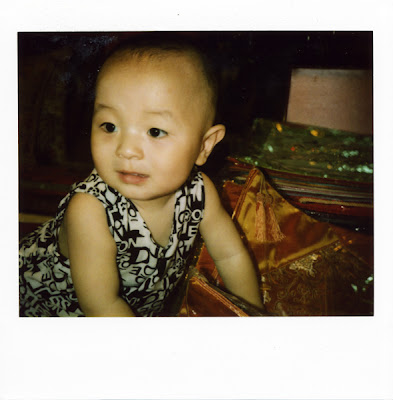