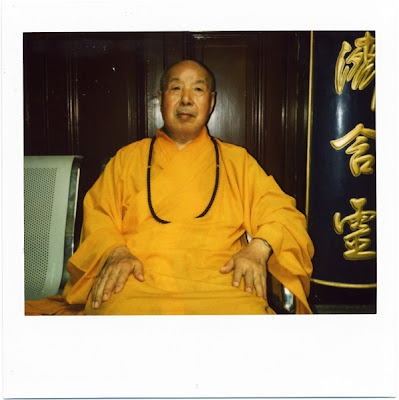 In Xi'an, we stopped at a Buddhist monastery, one of several Buddhist sites we had seen. It was terribly hot and we were left to wander the grounds at our leisure. The place had been turned into a minor Disney exhibit. Our guide made it clear that there is no religion in China, but that people's superstitions are tolerated. I poked around the grounds sticking my head into kitchens and dorm rooms where the monks lived. Those parts of the monastery presented to pilgrims and tourists were polished and maintained. The rest of the structures were like the rest of China, worn, frayed, and in need of attention. At the rear of the monastery, the furthest piece of ground from where we entered, I came upon a ceremony in a large, sparsely decorated room. There, ten monks sat a long wooden table, five to a side, chanting some service or prayer. They each had a book in front of them and they would occasionally turn a page, but never at the same time. They chanted in unison, sort of, but there were variations that went ‘round and ‘round the table taking a different cadence, a complimentary “melody,” a bit like the call and response in American field blues. An older monk sat in a high chair above the others. He, too, turned the pages of a book in front of him, but only occasionally did he join the chant. In the opposite side of the room where I sat, there were benches and some tables with food where two families sat about listlessly.

After college, I had become interested in Buddhism and had tried to learn about it on my own. There were no Buddhists in my small town that I knew of, no temples or ashrams or bookstores, only strip malls and car lots and laundromats and bars. I struggled with the books and tried to meditate at home, sitting on the floor, my legs crossed, trying to let my mind flow like a river, like the meditation I read about that took place in Tibetan temples where young monks would sit for hours on cold stone floors, unmoving, seeking the truest enlightenments. I was not very successful on my own, but I had continued to carry those romantic images with me all the way to China. There in that room I came face to face with Buddhist monks, sleepy eyed, bored, chanting by rote, minds drifting, drifting, endlessly on. They looked sleep deprived and I imagined that their day started long before dawn. It is probably the best way to keep young men compliant with the meditative life. I sat with them fascinated for as long as I could, but I knew I had to get back on the bus, so reluctantly (for even though those monks had shattered my romantic ideals, the strange chanting in the sultry, incensed air produced the intended effect) I left the chapel. Outside, I saw an old monk in saffron robes sitting by himself, staring ahead. He seemed to my imagination to be the Head Monk. I wanted to take his photograph, but I thought that I would be committing some blasphemy. Then I recalled from my Zen readings (these were not Zen Buddhists) the old refrain: "What should you do if you meet the Buddha in the road? Kill him." Emboldened by the teaching, I asked if I could take his photo. And just like many others I had met in China, he sat up tall, straightened his robes, and looked formally into the lens. I took the picture and we waited wordlessly for it to developed. He smiled and chuckled as his image emerged, so I took a second one and left it with him. I bowed to him with supplicant hands and said "Namaste," but he was busy putting the photograph away in the folds of his robe.

Every picture tells a story, don't it.


As I walked back to the bus, I came upon a street cleaner plying his trade and asked to take this photograph. Fresh from my Buddhist experience, I found him truly enlightening. 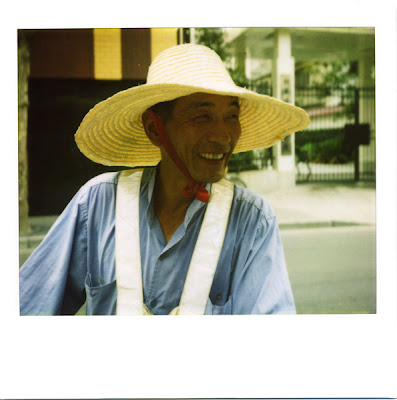