The Power of Photography 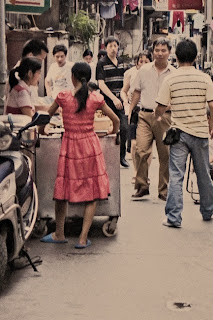 OK. I'm about ready to wrap this up, and I'm sure you are ready for that, too. I am tired and distracted, but I am alone, and that is what I want tonight. I do not want another ego in the room. Just now, the cat's is bigger than I can stand.

There are a lot of images left, so I may not be able to show them all. Tonight I showed them to my mother, and she put everything into context for me. She got back this week from visiting the hillbilly relatives in Ohio. Ohi-a. That is how they say it . My mother had gained a noticeable hillbilly twang when she got back. It was not so much the twang, though, as the forms that her expressions took. The constructions haunt my own writing and speaking. My aunt has a perfectly awful expression whenever things are surprising. It has been a part of my life, but I still laugh when she claps her hands together and yells, "Well shit the bed!" I have never heard another person say those words. There is, I believe, a hillbilly genius in the phrasing. 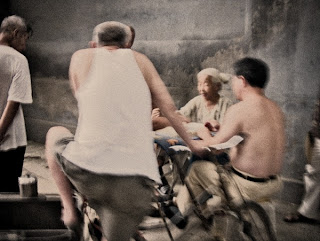 My mother began the evening by showing me photo-
graphs from her trip. Terrible things. I bought her a photo-
graphy class for Christmas a few years ago and gave her a very nice camera. Two years ago, I bought her a Nikon digital camera and a computer, scanner, and printer so that she would be able to play with her own images. Rather, in Ohio, she used a cardboard disposable camera she bought at a thrift store. The photos were what one would expect, poorly framed, off center images of people who do not fill the frame, heads in the bull’s-eye. "Here's where I went to elementary school, and here is where I went to high school." The buildings don't look old, mom. Did they rebuild them? "I don't know. Here's one of Patty on her porch. Here she's lying on the couch. Do you recognize this guy?" I'd never seen him before, I was certain. "That's your cousin, Teddy." Oh. I haven't seen him since he was six, I think. I gave up on family a long time ago. 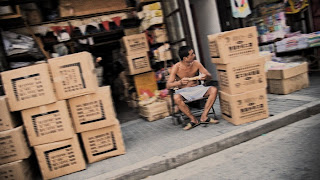 When she was finished, I showed her my China pictures. She would grab each photograph quickly and bend the corner so that the shape remained distorted after sort of like she was marking cards in a poker game. She was apparently dismayed by the thickness of the pile I handed to her, for she went through them like they were bad Lotto tickets. "What's this?" she asked with irritation. It's either two titties or a dog eating a bagel. What the hell do YOU think it is, I shot back peevishly. "You watch your tone," she said. I still flinch a bit, expecting a backhand. It's a street sweeper, mother. "Well where's the broom?" Flip, flip, flip. I realized she was irritated looking at these. There were no relatives, nobody she could talk about. "Were there any GOOD LOOKING PEOPLE there?" she challenged. Oh, god, oh god, of god. She looked at a picture of a man in a boat. "Was the water dirty?" Yes, mother, it was filthy. The whole country was filthy and there were filthy little Chinamen everywhere. It was awful. That seemed to make her happier. I was glad when she was through bending and creasing all the photographs I had spent the last two weeks editing and printing. 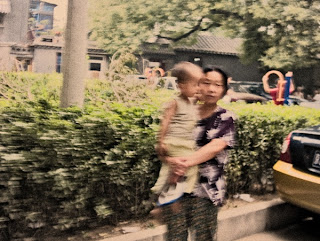 There is a certain power in photo-
graphy. Good pictures arrest the attention and allow the viewer to enter that frozen moment, to appreciate the color and texture and depth of intention. Not just those educated in such things. A good photograph transcends class and educational lines. It reaches out to everyone.


"Did I show you the picture of Martha all stove up in her back?" If any of you ever wonder why I am so plagued with fear and doubt about what I do. . . . But in the end, I know my mother has the inside on this thing. I know she is right.
Posted by cafe selavy at 3:16 PM