Tennessee Williams and Me 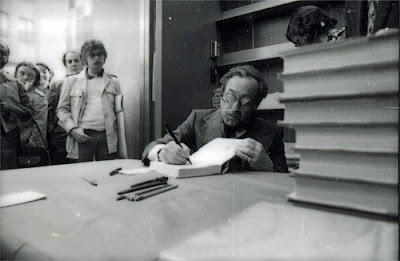 Here is another of those old, lost photos from 1975.  I had forgotten about this photograph until the other day.  I was talking to some students about famous people we had met, and I told them this story.

One day walking by a bookstore, I ran into a crowd of people, and I went over to see what was going on. Tennessee Williams was autographing his newest book. I think it was his autobiography. There were guards at the door keeping the crowd on the sidewalk. I walked up with my camera hoping to get a picture and nobody stopped me. Inside there was a long line. I walked around it and sat in front of Williams and snapped about ten photos. He and I talked a bit, silly stuff. I met him again a few years later in Key West. He was with a couple companions, young fellows. Again we spoke. I always tell people that I was drunk and said, "Hey Ten, give me five," but it is not true. What was true is that I was younger than his companions and that he liked me. He seemed to be a very nice man and he had the most wonderful voice I ever heard come out of a human mouth.
Posted by cafe selavy at 9:50 AM