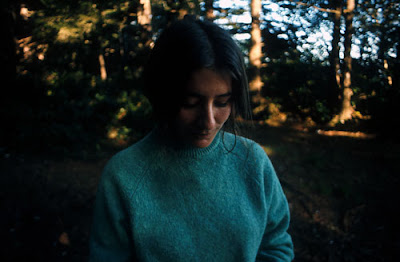 That is what they called it at F Blog. They just put up another of my 1975 road series, this time with a long, ill-written narrative. It is not ill-written, really. I like it but for the verb tense shifts, the doubled words, etc. I have to quit writing when I am drinking, or at least quit emailing. I think that I must have sent them the wrong version, pre-proofing. It is embarrassing in some ways, but then again it is a European site and readers may think English is my second language. It is, sort of. Hillbilly is my first. 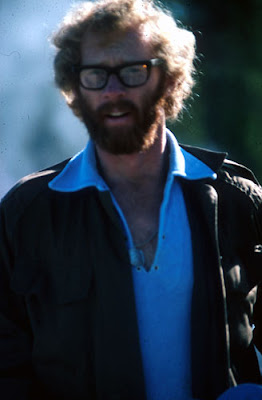 Here are some photos from that series. They are old slides that were not stored properly and have begun to disintegrate. Mold and mildew are unstoppable, I am told, once they begin. So the slides, though still vibrant in color, are maimed and disfigured. The first here is an image of the girl in the narrative, the one I met on the ferry to Vancouver Island, the one with whom I stayed on the beach, the one who went to Cat Island. I didn't say this in the F Blog article, but I was afraid to go with her because I had seen a Tarzan movie when I was a kid in which he was tied up in a cave and tortured by a woman wearing a leopard skin and a cat face. She tore the flesh of his broad chest with a leopard's paw. I imagined such a thing happening there with her, me lured to an inescapable island where a cult--The Cat People--lived.

The second image is of the South African. I think I got it wrong in the narrative. He was an engineer, a big, ready, rough fellow who made an impression on me. I wanted to be that tough.

The last picture here is of the Yellowstone River. I slept in a tent with my backpack full of food the night before, a mistake because there were bears all about. I was awakened in the night by heavy footfall and a deep grunting. I almost shit myself, panicked thinking I was in for a mauling. It turned out to be two other campers walking together and talking in low tones. The next day was the last the park would be open. I wanted to hike out and was told to speak with a fellow who had maps. He could show me a route. I approached him timidly. He was a long, odd fellow with a wild and spindly beard and dirty fingers that traced out an animal trail beside the river on the ancient paper. He barely spoke, just saying that this trail would meet up with the highway. And so I walked all day alone. It was marvelous and heroic until I came across some animal carcasses, skeletons of half eaten elk. It was an animal trail, alright. There was no evidence of human traffic. And soon, the trail grew swampy and divided, a series of trails splintering, breaking. Before long, I was walking with mud coming over the tops of my boots. I was constantly forced to retrace my steps to take another trail. It was useless, I thought in a panic, and I decided to cut across country in the direction I believed the road to lie. It looked easy enough, a hike through tall grasses and bushes, but soon I could not see ahead as I crashed through thorns and ripe berries. Berries! Bears, I thought, and my mind raced back to the carcasses I seen. I remembered that you did not want to startle a bear, that they would get out of your way (maybe) if they heard you coming. That was why rangers wore bells on their shoes in places like this, I thought. I picked up my pace, but wasn't sure if I was maintaining a direction or running in circles. Suddenly my ankle hit a fallen tree trunk and I pitched face forward into the muck sinking beyond my wrists. Shit, I thought, I almost broke my leg, and I began to think of what that would be like, to be stuck here with a broken leg, trying to crawl my way to the highway, the snow coming in that night, no one but that twisted Gandalf knowing that I had come this way, me starving in pain, my bones mingling with the elk, my promising life come to an end. Adrenaline brought me to my feet. I was moving now, clapping my hands, yelling in a high, scared voice, "Bear, Bear," when suddenly I broke out of the brush into a clearing by the river. There stood four or five fly fishermen terrified by the sight of me covered in mud, running from the brush, screaming. Oh, god, oh sweet baby jesus, there was the road just yards from where I stood. I had made it. I was alive. All that was left for me to do was to make my way past these fellows without further incident. There was no hope of maintaining any dignity, no point in making the effort, so I brazenly approached one man and asked where I was and if he knew if the park bus ran by here. And then I rested on the bank and made myself lunch. And right from that spot, I took this last photograph. 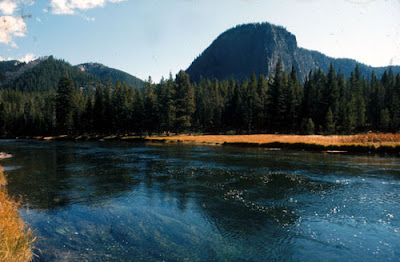