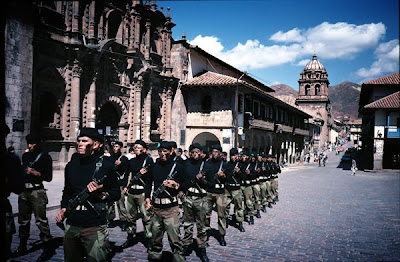 Next morning, I met Brando for breakfast at the Piccolo. He said we needed to meet with the guide who would take us on a three day tour of the Urubomba River, but after that, we would have the day free.

Etienne was a young, blonde Peruvian of French descent, and he was all smiles. Outdoor guides were like rock stars in Peru at that time, and everyone wanted to say hello. It was evident that he enjoyed the life. He would see to everything, he said. “just show up tomorrow at eight and I will show you the wonders of the river.” And other wonders, too, I intuited. Money exchanged, business concluded, he was off to get some sleep. His night, it seems, had been long. 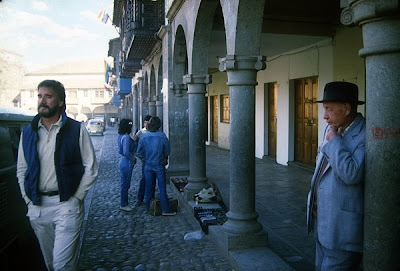 We wandered toward the train station down the Avenida del Sol, stopping in various shops along the way. Brando was known in many of the shops, but now I think that was partly by design. Then, however, I was still in awe of things and at every step, I felt a thriving vitality and heroism I hadn’t suspected. And that was exactly what I was feeling when suddenly I saw a face before me that I recognized. It took me moment to place the tall fellow in the llama wool balaclava and woolen scarf dressed like a native and selling trinkets from a little stand. IT WAS THE ITALIAN!

Brando turned with bright eyes and a smile, but as he approached, he seemed confused. He looked at me as if to ask who is it.

By now, the Italian had recognized us and was beginning to move, so I approached him rapidly. “It’s the fucker who called us dogs,” I said, and suddenly the Italian reached for his pocket. He was bigger than I and I was scared, so quickly I grabbed his arm, thinking he was going for a knife. He was strong and tried to pull away, and without thinking further, I twisted his hand back hard as I could, bringing him to a standstill. Next thing I knew, Brando had the Italian’s scarf twisted tightly around his neck. The Italian’s face was growing red, then scarlet. If I remember correctly, Brando was lecturing him on manners. 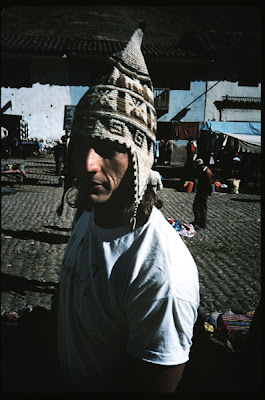 “This is bad,” I whispered to the Italian, “really bad. If I were you, I’d tell him I was sorry.”

The Italian’s tried, but he was not able to breathe right and it came out all crumbly, so with greater effort, he tried again.

And with that, Brando let him go and turned on his heals. Now it was my turn.

“I think you were lucky,” I said as I gave him a shove. I didn’t want him close to me when I let go.

As I turned to go, I noticed for the first time the large crowd that had gathered there on the broad avenue. They stepped back giving me a wide birth, but wherever I looked, people were smiling. I guessed that they didn’t like the Italian shyster, either.

I hurried and caught up with Brando. The day was especially bright, the sky surreal. Brando and I, still rocketing from our adrenaline cocktails, walked quickly, speaking in short phrases and monosyllables wanting to leave the scene behind.