The Day is Done 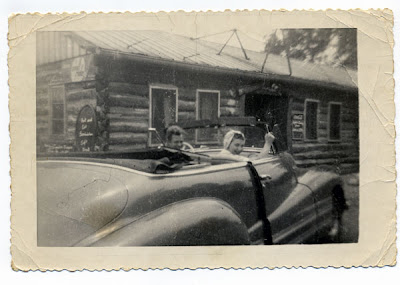 The day is done. I bought my mother flowers and took her to that hippie place my friend told me about. He was rignt; it was good food. My mother liked it. "Well," she ejected, "they just took an old house and turned it into a restaurant." My mother did not feel out of place at all, I think. Everyone wore silly mismatched clothing and had bad haircuts and were slow just like hillbillies. She liked everything we ordered. When I was in college, there were lots of restaurants like this, but then I would never have dreamed of taking my mother to such places. "Are there flax seeds in this," she asked the waiter. "I don't know, but I'll go find out." And off he trotted. Suddenly she was a culinary queen.

It was a better day than if we had done something else, if we had gone to a nicer restaurant and had eaten too much.

Here's a photo of my mother as a young girl running around in a convertible. It looks like she was eating at something akin to the hippie place we went to today.
Posted by cafe selavy at 8:06 PM