Difficult To Do With Friends

I have trouble taking photographs when people I know are around. Walking around with a camera is hard enough. I mean you either look creepy or nerdy. There is a rhythm I have to get into and a personality I must assume that I cannot enter when I am with friends. Wearing a camera is a little like smoking a pipe and wearing a bow tie. Figure it out. I love cameras. They are fetishes as much as tools, magic. But I think of all the people hanging around the photo stores on dealer days when Canon or Nikon or Leica reps are doing camera demos. They come out of the woodwork to stand next to the rep and talk about technical things. These are people who take hideously accurate photographs. Stereotype, I know, but that is how I feel when I walk about with a camera around my neck. Like I’m smoking a pipe and chatting about skin diving. Don’t worry, I’m not really making fun of people. I have several pipes and skin diving equipment. It’s just not something to brag about.

So I am blaming some of my failures in NYC on Q coming with me. He is a great guy, smart, and he loves and understands art more than most. But when he is with me, I see myself from the outside, approaching a stranger, protstrating myself low like a fawning dog, taking a chance that I won’t be appreciated by the people I meet—or worse. No, I want to be icognito, anonymous, almost invisible.

I’ll illustrate. On Saturday, I was to meet Q and his girl for breakfast, but I got the address confused and ended up in the West rather than the East Village. I was alone and in the street and nobody knew me, so I wore not one but TWO cameras, a Full Clevelander, if you will (for those of you not from the U.S., that was a fashion faux pas of the 1980’s, a WHITE belt AND matching WHITE shoes). I decided to cut through Washington Square and make SOME ART. No distractions, I screwed up my courage and sharpened my vision. Three bench sitters. Not fast enough. The woman on the left saw me and quickly go up to get out of frame. Then another. I climbed over a railing to shoot a bench sitter watching young mother’s parade their babies in strollers.

Then I saw him, a striking fellow with a whispy Fu Manchu sitting on a bench with his belongings. Time to make contact. I approached him holding up my camera in a passive way.

“Hey, you mind if I take your picture?”

He looked at me for a while like he couldn’t hear. Then he asked, “Are you a professional photographer?”

“Because I’m a photographer. But people come and take my photograph all the time without even asking me.”

He was silent again for a little while and then he asked, “Can you give me a dollar?” 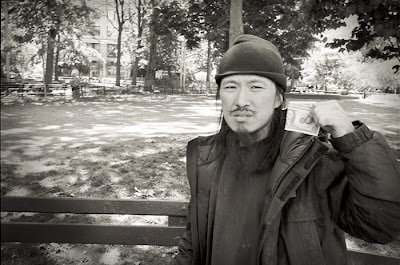 Sure, no problem. So I handed him the money and put my camera to my eye. He held the dollar up to his face.

“Listen, you don’t have to pose, just sit there like you were when I came up.”

I tried to take another photograph, but he put the dollar in front of his face.

“What are you doing? I just want to get a picture of you.”

And that is when it started going wrong.

“You got your picture. One dollar, one photo.”

“People come here and take photos and don’t ask me and then they leave without even talking. I never even get to talk to them,” he complained.

“I’m not like that. I asked your permission and I’m not going anywhere. I’m talking to you.”

But something had set him off. Hunger, loneliness, righteous indignation, or any combination of things. But suddenly he was standing, taking off his coat in an aggressive way. Then he paused, so I took another photograph. This irritated him more.

I don’t respond very well to aggression, and sometimes that gets me into bad places.

“Look, I don’t need to pay you money or ask your permission to take your photograph. This is a public place. Watch this!” Snap, snap, snap.

Now he was going wild, but suddenly there were two fellow wearing green uniforms and another who was clearly NYPD standing there. One of the fellows in green (some sort of parks police) asked forcefully, “What’s going on here.” I figured I’d be sharing a holding cell with this fellow for a little while if I didn’t handle this right. So I threw him under the bus.

“I don’t know. I asked this guy if I could take his photograph and he asked me for money so I gave it to him and then he started going nuts.” Now I may have looked creepy with the camera, but at least I didn’t have all my belongings with me in a shopping cart. I felt the advantage. “Listen, it’s OK, nothing’s happening here,” and I turned and walked away with a big show of resignation. I heard Fu say, “Yea, everything is OK here,” in a new voice, but when I looked back, they were surrounding him. Surely in a moment they would be using mace. I’ve seen these fellows work over bums before.

And with that, I made my way across town to have breakfast with my waiting friends thinking how awful I was, how badly I had acted. Yes, these things are always best done alone.
Posted by cafe selavy at 7:55 AM