Yesterday I wore double-denim--a denim shirt and jeans.  It was a bold move, I think.  I couldn't tell if I looked like a casual Andy Griffith or something else.  Everyone agreed that I needed black jeans to go with the shirt.  It is good to get the group's opinions.  What can you do? I found this photograph on the photographer Mark Tucker's twitter page.  It is a color picture that was floating around the internet that Tucker post-produced, I think. 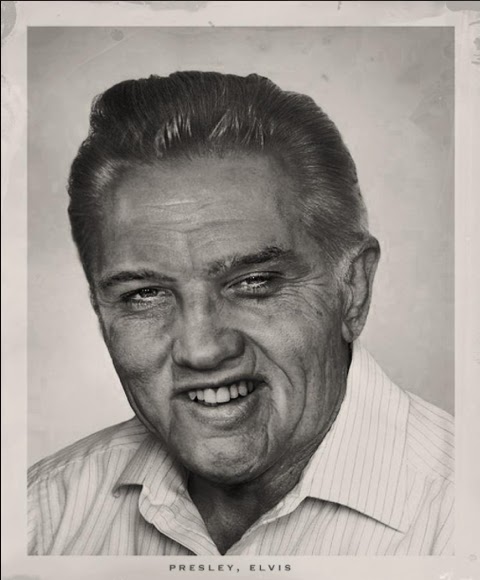 This is pretty much how cool I felt myself in double-denim.  In truth, this looks like my father did at the end of his life.  That is how people used to look after sixty.  It is a creepy picture that haunts me.  Oh, those ravages of time.  Perhaps it was better he was spared all that.

But the picture got me thinking.  It is inevitable that we identify the person with who they were at the end of his/her life.  Not what they were, but what they become.  How do you think of Warren Beatty, for instance?  Or Jessica Lange?  Oh, sure, they may have been beautiful once, but not like someone who is currently in her twenties or in his early thirties.

This Elvis picture, though. . . it is causing me nightmares.  I think the shirt is half of it.  My father always wore such shirts.  That is how he wore his hair.

I can't reconcile myself to this whole life thing at all.  I have tried, but it makes no sense to me.  I am vain and self-obsessed, I guess, a powerfully bad combination.  I've tried not to be.  I've really tried.  But if this picture can cause me so much agony. . . I mean, really. . . what' the use?

I don't even like black jeans.
Posted by cafe selavy at 8:16 AM