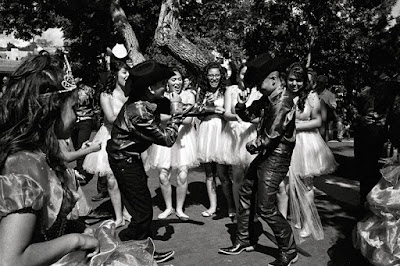 I probably couldn't have told you the Pope's name until today, but now I am ready to convert to Catholicism.  Pope Francis.  What a fellow.  It is his stance on climate change that has made me a believer. "The vision that Francis outlined in the 184-page encyclical is sweeping in ambition and scope: He described a relentless exploitation and destruction of the environment, for which he blamed apathy, the reckless pursuit of profits, excessive faith in technology and political shortsightedness. The most vulnerable victims are the world’s poorest people, he declared, who are being dislocated and disregarded."

Jeb Bush had a wonderful retort:

“I think religion ought to be about making us better as people, less about things [that] end up getting into the political realm.”

He couldn't exhibit a clearer example of his explicit denial of logic if he worked at it for weeks.

I've always loved the Catholic Church which was once simply The Church.  It is Janus-faced, the most human of religions.  You needn't know much to be led about by scholars with foibles.  Were this the middle ages, I'd rather be inside than outside the church structure.  It would be the only place where you could read and write and make art and music in relative comfort, I think.  Some of you scholars may set me straight about my romantic concept of corruption.  But Pope Francis is right on in my book.  Religion ought to be about making us better as a people.  Let me see--Jeb or the Pope?  Who is leading in that race?

See those kids dancing in the today's picture?  What do you want to bet they are Catholics?  Of course they are.  Prancing and preening at fifteen, playing the mating game.  Religion is a big part of their lives.  It sanctifies the ceremony, gives them a structure for living.  You see?  Making them better as a people, seized by the Holy Spirit.

Now premarital dancing is not going to save the world, and maybe nothing will, but Pope Francis. . . now there is a man leaning in the right direction.  Science isn't moral and scientist cannot be moralists or they are not scientists at all.  But the Pope. . . now there's another thing.  His encyclical is the best article I've ever heard a religious leader declare.  I'm afraid, however, that most people of faith will feel differently and (if history is any indicator) that the Pope's decree will have the opposite effect on the masses than it does on me.

I'm afraid Pope Francis will not be Pope for long.  Selavy.  Let the kids keep dancing to Nero's fiddle (1).

(1) "He is infamously known as the Emperor who "fiddled while Rome burned".  He was rumored to have had captured Christians dipped in oil and set on fire in his garden at night as a source of light."  Wikipedia
Posted by cafe selavy at 8:03 AM