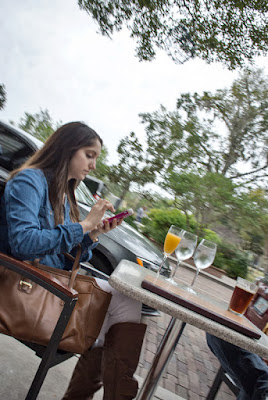 I was outbid on the Leica.  It's o.k.  It was silly.  I have all the cameras I need.  That was just. . . I don't know. . . desire.  It would do a better job at what I want to do, but not that much better.  It is simply--I think--that the Leica Ms look so cool.  They shouldn't cost so much, but then again, I saw a Mazaratti and it was beautiful and shouldn't cost so much, either, but if you want one. . .

I took the picture above with the Nikon V1 I bought on eBay for under $200.  All I'm doing is walking around and shooting inconspicuously from the hip.  Do I need a $7,000 camera to do that?

I took this picture with my iPhone.  Low-fi.  I'm a low-fi guy anyway.  Some weirdness in the picture, distortion, banding, but I think it is cool nonetheless.  That is not really how the beach looks here (it is where I am now).  It is not a bay but a straight out Atlantic Ocean beach.  But it was practically free.

Breakfast is ready now--blueberry pancakes and mimosas.  It is a jazzy, beachy Sunday morning.  I am being called.  C'est la vie.
Posted by cafe selavy at 9:22 AM