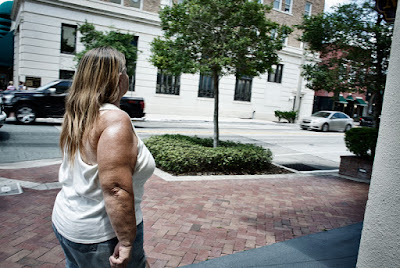 Somehow to me these street photos of small town America are much more depressing and even scarier than those made in the metropolis.  There is an empty abandon in them, a nothingness that seems overwhelming.  Small towns are not supposed to be that way but rather a respite from all the madness and technology of the city, so perhaps it is me and my vision that are at fault.  Where others find a "charm" in small towns, I often find a lack of attention to details or a "making do" if you will.  It is like the search for good homestyle restaurants in North Carolina.  Couldn't wait to get me some good home cooking.  Baked beans from a can, overcooked vegetables, everything swimming in grease.  If you are able to find a gem, you write it up, I guess, but it is definitely not the norm.  If you watch Anthony Bourdain with a critical eye, you will know that most of the food he is eating on that show would not impress you without his enthusiastic commentary.  Go there on your own and try it.  You will be disappointed and perhaps a little depressed. I might be speaking of life in general, though. Or it might be bad luck and a lack of training.  I have been in San Francisco unable to find a satisfying meal.  Of course, if I had wanted to spend unusual amounts of money, I could have eaten well, but the things that most people were eating in San Francisco sucked.  Q and I ate at the Mason Street Cafe or Cafe Mason or some version of that and had one of the best breakfasts of my life.  It was a French place with the best looking waitresses I've ever seen in real life.  I have eaten there many times since.  Perhaps it all takes local knowledge. In the small town pictured above, my friend took me to a Mexican Tapas restaurant of all things where we had a delicate Mexican lunch that was better than most meals you will find, so perhaps I exaggerate.  But the interior design of the place was a hodgepodge of a lack of attention to detail and the thermostat was set way too high.  I'm just a little bitch I guess.  Still, I'd go back. This little town had a private college of some repute, and there was a state museum there that is a pretty good one.  I don't want to give you a wrong impression.  Small towns get much more depressing than this one. 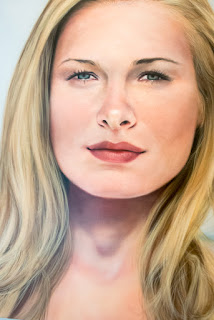 And so can anywhere else, really.  It is, as they say, a lack of internal resources.  I only meant to comment on the content of the pictures, but way led to way, etc.  I will try harder to be like Anthony Bourdain.  He has made quite a career out of a little bit of imagination.
Posted by cafe selavy at 8:51 AM