The Cycle of Living 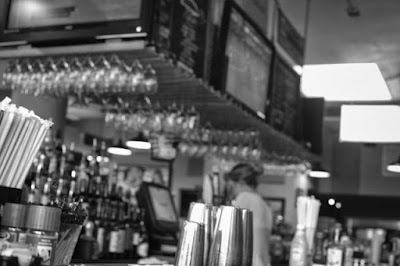 Blogger is giving me trouble again this morning.  I am not able to post a picture.  Google probably knows that I don't have anything good in my files and is being benevolent.  No matter.  It will let me post one by the end of this entry, I am sure.

I spent most of yesterday resting just like I said I would.  I slept long and hard Friday night.  Saturday, waking late, I went to the gym, had some lunch, went shopping with Ili, and then went back to bed sleeping from two-thirty until six.  Got up then to a downpour.  Poured a cocktail.  Then, with the rains passing, we put on rain jackets and went to the little Italian place for an arugula salad, mussels, spaghetti and meatballs, and a little chianti classico.  We sat at the bar, of course, for that is what we like, and in the little dining room next to us there was a wedding.  We thought it was the reception, but no, it was the whole shebang.  The bride and groom were in their sixties, I'd say, and they were grinning like crazy.  It was too bad, really, for I had been pimping Ili to go over to the groom and say, "John, my God. . . is that you?!?  Wow?  You're getting married?  A lot of pockets are going to be a little shallower now, eh hun?  Well, congratulations. . . ."

They were, by and large, not a glamorous crowd.  But we applauded when the room applauded just after they had taken their vows, and Ili and I hoisted our glasses in a salute to the newly weds.

After dinner, I ordered a black sambuca.  It was Ili's first, she said, and she liked it.  We looked out across the bar through the big open window that is not a window but a pass through to the people sitting outside and gazed into the failing light and rain.  The street was slick and shiny.  It felt like a good night to go home.

On the couch, we looked through the movie rental options.  Nothing as good as the one we watched the night before.  We settled on "True Story" with Jonah Hill and James Franco.  Ili Googled something about the movie and came up with lots of information about Franco.  He has popular twitter and Facebook accounts.  She read aloud from them and showed me pictures he had posted.  She read the news stories of Franco trying to hook up with a seventeen year old at his hotel.

Don't bother watching the movie, though.  It has no dramatic arc.  You can't put your finger on a central conflict.  It is just one thing after the other.

Unless I missed something.  I did fall asleep at the end.

Then bed and another round of snoozing.

There will be no sun today.  I have a ton of work to do, so there is that.  I will go to the gym at some point, but only to expend energy that will build up from sitting at the computer all day.  Then dinner with mom.

The cycle of living.

I was wrong about one thing.  Google is still not letting me post a picture.  I will have to publish this and then go back to see if I can edit it later.  Google rules this roost.

Selavy.
Posted by cafe selavy at 8:58 AM