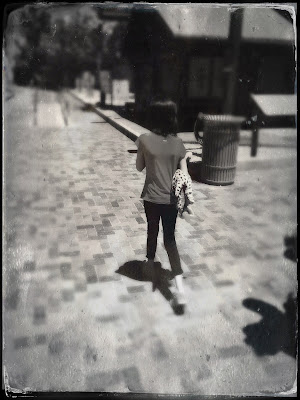 It's not you, it's me.  The meltdown has finally come.  I am unable to do the simplest things.  Suddenly, I am ineffective.

I was visited last night by ghosts.  It has never happened to me before.  They were not spirits in white sheets, of course, but dreams of people and things from the past, people who were never central to my life but who I knew, people at the factory who long ago retired, people from around town.  I wondered about them and thought of how old they would have to be now.  Thoughts of things I need to do that I think I can't do visited me, too, like spirits, more white-sheeted than the other.

I broke down in my sleep.  I was suddenly worn out.  Useless.  I wondered about the efficacy of my brain.  Even the simplest tasks are taking too long.  I struggle to read the words on the page as if they came to me from some great distance.

A lifetime of working and not saving are real now, too, and I became paranoid about being unable to maintain this old house, worried about the things that will surround me.

I have too many things and too many worries.  I once could do everything.  Suddenly. . . nothing.

When I woke, I pulled the big, heavy comforter to get out of bed.  Just that caused a stabbing, shooting pain in my forearm and elbow.  My back and hips hurt as I stood.  In the bathroom mirror was a shriveled old fellow I didn't want to recognize.

Slowly now I come back to life, but the ghosts, as they are supposed to do, haunt me.  I am to have beers tonight with two of the other three band members from the days when we were playing to big crowds.  I don't look forward to it, to revisiting the past or to looking into some ugly future.  I am not a nostalgic man in any way, at least not about my own life, and the future isn't looking like it will bring me any Olympic medals.

I learned more about Willy Loman last night than I want to know.