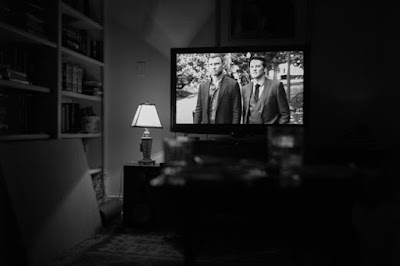 This is as far as I've gotten with a camera.  Ili came by last night.  I told her I had been feeling ill, that the side of my neck hurt and felt swollen and that I was sure I had cancer.  I didn't want to do anything but watch television with a bottle of whiskey.  She felt my neck and said both sides were swollen and that it wasn't cancer.  How the hell do you know?  I asked.  You've got swollen glands, she said, its not cancer.  Why would my glands be swollen if its not cancer?

But her telling me that made me feel better.  Neither of us felt very energetic and so we made soup and sat on the couch.  She is on antibiotics, so she couldn't have even a glass of wine.  I could.

As she heated the soup, I searched for a movie.  Either nobody is making good movies any more or they are not making their way to television, even for pay.  We settled on a biopic about Brian Wilson of the Beach Boys.  "Love and Mercy."  I didn't have much hope that it would be any good, but we had tried rewetting "The Mexican" which we had each seen a decade ago, and we couldn't do it, so. . . .

It turned out to be good if for no other reason than for the Mad Men/Masters of Sex/Pan Am visual styling.  And for Elizabeth Banks.  She was compelling.  And so, as usual, when the movie ended, I poured a whisky and got my guitar to render some acoustic Beach Boy tunes for Ili.  I think I nailed a good rendition of "Help Me Rhonda."  At least Ili was laughing.

I am up on a cloudy morning waiting for the cable men.  They are scheduled to rewire my today, somewhere between eight and ten.  It will take hours, and I will be without cable, so life will suck a bit.

But Ili was right, I think.  The cancer seems to have gone away this morning.  Mostly.  Maybe something is going around.  Maybe not.  I need to take care of myself better, I know, and get rid of most stress.  I was going to take off work yesterday, but after sitting nervously and miserably around the house in the morning, I decided it would be better to get paid for my miserable anxiety than to suffer through it for free.

Best thing this morning is that I have a breakfast bun. I will eat it with the last cup of coffee in a moment.  I don't let myself have them any longer because they make me fat, but I am splurging today.  It is one of life's great pleasures, I think, eating some starchy sweet thing with coffee in the morning.  I'll take my pleasure now before the cable boys come calling.
Posted by cafe selavy at 8:59 AM