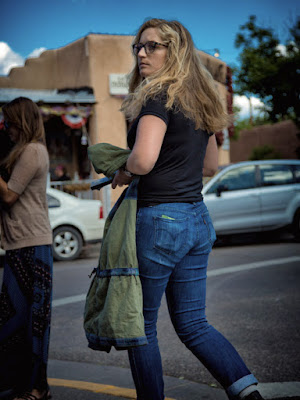 Here, the last day of summer felt more like autumn than does the first day of fall.  Still, it is the Carnal Equinox once again, equal parts daylight and dark, pumpkin and spices.  Everywhere I go, there is pumpkin something--pumpkin beer, pumpkin ale, spicy pumpkin coffee and pumpkin rolls.  Pity the pumpkins, but I'll not be drinking anything with foo-foo pumpkin in it.  I'll take me some pumpkin bread, perhaps, to have with my morning coffee.  And Ili is mad to start carving some jack-o-lanterns.  She bought a carving set and everything.  I don't care much for the carving, but she looks forward to me watching her at work sitting on the porch with a drink in my hand.  Ah, kids--what can you do?

Q called yesterday to talk about this and that.  We were talking about Amy Schumer and how funny she was and that she was able to say things no man would be able to get away with.

"I'm going to become transgender," I told him, "so I can say what I want."

"I thought you were already transgender," he replied.  "Doesn't that just happen naturally when you get old?"

Funny old Q.  I won't tell you the rest of what he said, though, so as not to embarrass him.

As evenings come earlier, I am going to have to change my habits.  I tend to sink with the sun, and I try not to drink before evening, but are beginning too soon.  It is time to turn my attention to yoga and teas, I think, and maybe a little wine during the week.  I don't know how you in the north can do it.  What do you end up with, six or seven hours of daylight?  That's why old people move south--not because of the cold, but because of the dark.  Old people can't see for shit in the dark.  Buy your mom and dad a Kindle for Christmas.  They will love you for it.

O.K.  That is as much as I'm allowed today.  Once again, I must give myself to the factory.  That is my autumnal fate.
Posted by cafe selavy at 8:24 AM