A Modest Farewell to Summer 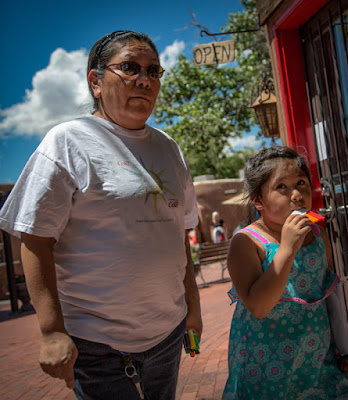 I am lazy all the time now.  Not just a little, but plumb worn out lazy all the time.  Weekends are for sleeping, apparently.  I can put in twelve hours a day now, no problem.  Perhaps it is depression.  Perhaps it is just the amount of stress and factory work.  I don't have an answer.  But yesterday's chief accomplishment was a four mile walk.  I tore my Achilles on my first two mile run about five weeks ago and haven't been able to go far on it since, but NYC is coming up and that will be nothing but walking day and night, so I decided I had to begin walking every day.  Maybe it is my age, but man, how fast can a man get out of shape?  Walking made me sore.  Everything below my waist is painful. The Achilles flared up a bit, too, but I can't be a sedentary man any more.  I see people in worse shape than me out jogging, and I ask, "Why them?  Why not me?"

After the walk, we went to brunch.  Perhaps I shouldn't have mimosas.  I know.  But it was hot and beginning to get steamy on the last day of the last weekend of summer, and we were celebrating, so. . . an afternoon nap was necessary.  On awakening. . . I didn't, really.  And it was time to make dinner for my mother and a friend, time to make the hamburger patties and start the grill.  When my buddy got to the house, he said I looked "slow."  I was.  I didn't even feel like drinking.  The eventual dinner--hamburgers, hot dogs, baked beans, salad, and pimento cheese for whatever one wanted it--was a low key affair. The So Long to Summer weekend ended with a thud.

When my mother and friend were gone, after the table was cleared and everything cleaned, we collapsed onto the couch.  I ended up doing something I really didn't want to do.  I watched the Emmys.  And once I began, I couldn't quit.  What a horrid, hollow affair it seemed, an embarrassment, really, but there I was watching ten minutes of commercials and six minutes of show.  And in truth, the commercials were better.

I don't know what I learned, really.  Actors are just that, and most of them are bad at accepting awards, worse, really, than most people (though I will give them that they are in front of a larger audience).  Do people really need to thank everyone for the award?  Really?  I guess it keeps them from having to say something with substance about what they do or did.  The old formula save them a lot of effort.  I understand.

The one thing I realized about television last night, however, was that. . . well. . . the actors are not glamorous.  They are more like "you and me" than we are.  Unless they are on a pay channel, they portray goofy, really average, oddly-shaped, not-too-smart, not-too-clever people.  Commercial t.v. apparently must be delivered in lines rather than episodes.  The shrinking American mind.

That is true except for the stuff I pay to watch.  That is really good.  That is what I gleaned in my near comatose state.