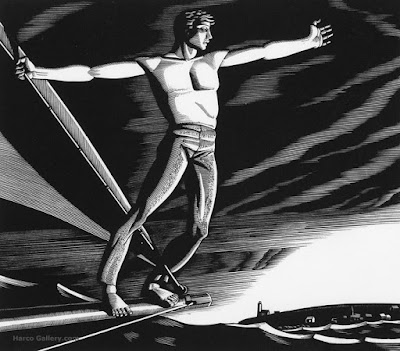 I couldn't write this morning.  Factory duty.  I may not have time to write in the morning, either.  The working life.  Ain't it grand.

I got a call from the foundation that owns the building where my studio is located.  I have to be out by the end of the year.  Everything has to be moved somewhere.  I will have no place to work.

If I could, I would check out Detroit.

It has been a hell of a year, my friends.  And still, it has been grand.

I ate dinner watching "The Fabulous Baker Boys' on t.v. last night.  I hadn't seen it since its release in 1989.  It looked like a movie made in 1989.  Bad times for film.  But it was the classic "bad boy" theme that has, perhaps, directed my life.  I read books and watched films always fatalistically attracted to that life, that character.  I think it came from my father and his generation.  They were pretty "silent."  They didn't say much and certainly didn't emote.  They experienced the brutalities and deprivation of both the depression and the war.  If they survived, they were happy with less than their kids would be.

A boy on a bowsprit heading home.
Posted by cafe selavy at 8:15 PM