The Fallacious World and It's Proponents 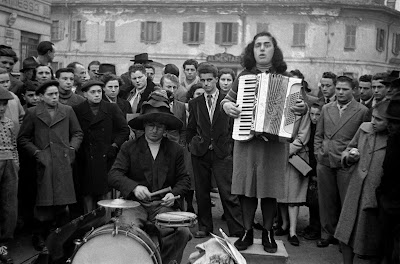 Frank Horvat is one of my favorite underexposed photographers.  He is a "photographer's photographer" I'd say.  His work spans from the 1940s to the present.  Early on he was a photojournalist.  Later, he shot fashion for the bigs like Vogue.  He still maintains a blog, mostly of personal work.  I went there for the first time in years today and got a bit of a surprise.  He has moved in an interesting direction.  But he'll never top these early images, I think, when he was young and the world was more naive.

"More naive."  Did I really say that?  I withdraw the statement.  I begin to fall into the groupthink that surrounds me, this feeling that we are now, somehow, more enlightened than people were that came before.  I watched Bill Maher the other night.  He had Ted Kennedy's son, Patrick.  Patrick served in the House while his father was still in the Senate.  They had an uneasy relationship, but Patrick was excusing some of his father's behaviors as being "of a generation."  Bill Maher agreed.  That is just the way a generation acted.  I am surrounded by people who are younger than I that feel they know more profound truths than the ones with which I grew up.  "Truths."  This is a term with which I have much quarrel, at least the way it is often used.  But it is this "enlightenment," really, that bugs me.  Groupthink.

Here is a quotation I sent to a young scholar, a male feminist, yesterday that followed another that was more derisive of Ted Hughes:

“His effect on women was incalculable. When Sylvia Plath, his future wife, met him at a party in 1956, she wrote in her diary about “that big, dark, hunky boy, the only one there huge enough for me.” His lover Assia Wevill said of him: “He is one of God’s best creatures. Ever. Ever.”


This poet’s pheromonal impact was such, Mr. Bate writes in “Ted Hughes: The Unauthorised Life,” that one woman who met Hughes at a party “was so viscerally attracted to him that all she could do was go to the ladies’ room and vomit.””

It may be difficult today to think that people ever uttered such words in such a way.  It is even difficult for me (and I've made some women puke in my time, I know).  For him, though, it is a morality issue.  We have better understanding of gender and equality.  I argue with him that these are values and not objective truths.  It is simply another value-laden argument.  You can't escape it.  And what scares me most is the herd instinct on most of these social and identity issues.  I don't mind people doing what they want.  I don't even mind that it is sanctioned if not sanctified.  What scares me is the totalization of the value.

I don't know.  Romantic rebels and all that.

I want to become a camera and just record.  Cameras don't record the truth.  I know that better than most (experientially, I mean).  I don't want to evaluate or argue.  I just want to make images that show the world as it was in a moment in all its fallaciousness.  It is not the world that is fallacious, perhaps, but only our perception of it in small little bites.

There is nothing fallacious about Horvat's photograph of the accordion player, though.  That is just the way the world was.  Just then.  At that time.  It must be true.  I know it.
Posted by cafe selavy at 8:22 AM