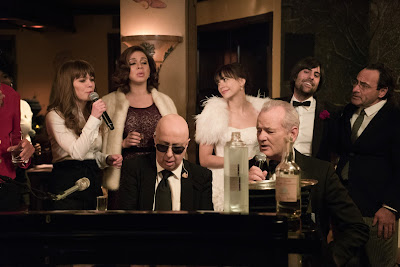 I just finished watching "A Very Murray Christmas" on Netflix.  It is Friday night.  I will explain it all before I go to bed.

First of all--it sucked.  Truly, and I am a fan of just about everything in the special--Murray, Sophia Coppola, Jason Schwartzman, the Carlyle Hotel, Paul Schaffer.  But let me establish this--it sucked.

Now that I've said that--in retrospect, I can't get it out of my head.

The worst part was Bill Murray.  If you have ever loved or liked him, it is tragic to see him age so quickly.  Booze and drugs.  It scares the shit out of me.  You can even see the gut tucker he wears in some of the shots.  His face reminds me not to look closely or at all in the mirror.

The first song is the classic.  I wish I could post it here, but only an old Dean Martin version of "Christmas Blues" is available online.  You will want Murray's version.

And you will want the Murray/Schaffer version of The Pogues "A Fairy Tale of New York," too.  Here is The Pogues version (link).  But trust me, the Murray version is special.

And there are the lyrics to every song that add up to something.  Just that.  If you just listen to the lyrics, you will get what they were on about.

Forget the stars.  It is the rest, the people you are not really sure who they are.  Who is playing the part that Tom Waits surely should have played?  I still am embarrassed not to know.

But the night was not all that.  I woke this morning just wanting to get through the day.  I wanted to leave work early and go to the gym, then go to every grocery store and buy decadent and tasty food, and then get on the couch and watch "A Very Murray Christmas."  And I did leave work early and I did go to the gym, and I did come home and shower and prepare to shop.  But the emptiness hit me, and I didn't want to get on the couch alone, and I decided to go to the world famous bar for a drink.  When I got there, it was full of assholes and there wasn't a seat at the bar, and being the way I am, I walked out and decided to go shopping after all.

I only made it to Fresh Market, but I walked around the store like I was memorizing it.  They have such shitty food but such good ingredients, and I bought this and that, fresh pumpkin bread for the morning and various old fashioned candies and special nuts.  I bought wine and Dale's Pale Ale and some bbq ribs and mashed potatoes because I decided I wasn't going to cook.  And there were things put into the memory bank to come back for.  And then, so much later, I headed home.

I made a cabbage and garlic salad and watched another show because it was too early to watch Murray, and I drank the Pale Ale.  And then it was time.

I poured a scotch.

There were mistakes galore.  Miley Cirus, for instance.  But who were those other people who were great?

I matched Murray drink for drink.  And then when it was done. . . .

I began to email.  Because. . . fuck, I was sad in the happiest of ways.  A shared vision of sad, sad Christmas.

Oh. . . I sent messages and videos.  And the responses I got were disappointing.  I wanted my own Paul Schaffer to keep me company.

I will recommend watching the special. . . but only if you are drinking and are close to drunk.  It missed the mark, but it is my kind of Christmas.

I have promised myself that I will play "A Fairy Tale of New York" for all the factory workers at this years Christmas party.  I have already practiced.

That is my review.

I got fucked in love this year.  It is still with me.  I am closing up the studio this weekend.  Everything feels like it is over.  I will watch "A Very Murray Christmas" again.  It is the sort of thing that gives me modernist hope. 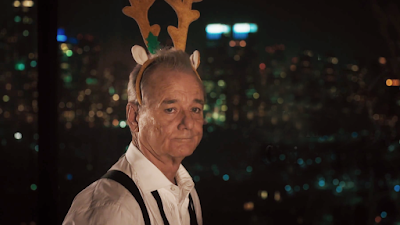 I should have read this.  It is the best review of the show (link).

If you needed to demonstrate the multifaceted brilliance of Murray, and account for what the Times recently referred to as his status as a “secular saint,” you might skip the career-highlight reel altogether and simply show this hour. The man rollicking down at the bar, kicking off the next song and revelling in the various gifts of his friends, is the same man who starts the night staring wistfully out the window and begins the next day doing the same. A man beloved and yet, also, apart. There’s a reason that the best Christmas songs are the sad ones.