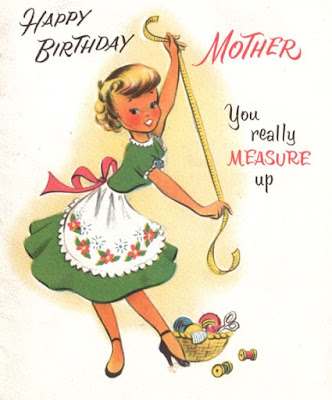 I have a lot of friends with December birthdays.  Today is my mother's.  When I woke up, I sent her this card.  Always vintage.  I really can't think of a thing to get her.  Presents are such an outdated idea, at least the store-bought kind.  The tradition came when we lived in a rural world when people had access to little.  A piece of ribbon from town then might be thrilling.  A book.  Some oranges.  If you went to the Big City, of course you would buy exotic wonders for others.

Now--there is Amazon.  Everyone already has everything they want except for the things we can't afford to buy them anyway.  But small gifts from Bloomingdales are ridiculous any longer.

And so I'm stuck.  I will buy her flowers and take her to brunch and make her dinner.  But shoot--I'll have to get her something, too, no matter what.  It makes me anxious.

Yesterday I went shopping with Ili yesterday on the Boulevard.  The yahoos had it from one end to the other.  No one carried purchases.  They were the standard walkers and gawkers who would stop somewhere to get a bite to eat.  Of course I disparage them.  They need to pay a visitor's tax so that mine can go down.  But we were festive enough and I took her to some stores she had never seen.  There was a cute little bookstore on a side street across from my ex-wife's shop.  And there is a cute home decoration store that has begun to sell more and more women's clothing and accessories.  We walked in and looked about and then I heard a woman's voice say, "Hello."  I turned around and saw one of my ex-girlfriends from long ago.  She was the one from ancient family wealth, the one out of whom all random behavior had been bred, the one who glitters when she walks, the one with the aristocratic voice.  She looked as she should.  I haven't seen her for years and years as she lives in Manhattan, but she was home for the holidays, she said.  I introduced Ili and we chatted for some time, asking about relatives and friends, etc.  It was a very pleasant exchange but went on longer than the "ninety second rule."  That is what I call it.  Her mother is a very gracious and lovely woman and always stops to say hello when I see her, but you could set your watch by the time the conversation takes from start to finish.  "Well, it was good to see you.  We have to. . . ."  I have learned from it.  It has served me well.

Afterwards, we went to Restoration Hardware to buy a tree.  I wanted one of the little stick trees with the LED lights.  Sophisticated and spare, I think.  Ili didn't like it at first, so I thought we would take a flyer on it.  We walked around the store, though, and she saw one that was gold with little handblown gold bulbs hanging from it.

The one she was looking at sat atop the same table that I have at home.

I asked one of the women working there if we could get one.

"We've sold out," she said.  "They have sold out online, too.  I can sell you the floor sample if you want it."

Ili helped her twist the limbs up so we could walk it to the car.

"It's like going to the lot and picking out the tree you want," I said.  "We get the one we looked at."

At home, we set the tree on the side table and began to shape the branches.  I draped the bottom of the tree in faux-fur just like they had in the store.  We went to the attic and got down some old decorations and put some red and white soft, furry stockings on the mantle.  We draped the Santa hat across a chair and hung a red bow on the door while jazzy Christmas carols played.  We drank some egg nog with Old Crow that she had bought the night before on the recommendation of a Kentucky man who told her that she needed to mix the nog with something that had the word "Old" in it.

I haven't had decorations up for many, many years.  It is not something you do alone.  I like the little tree.  It has such a modernists flair.  And I must say that up until recently, all the trees in the store were just that.  They did not have ornaments on them.  One day a couple weeks ago, I was in the store with my pal and we were talking about buying these trees.  He was going to get white birch, I the darker, sparer one.  I picked up some of the bulbs that were in a display and began to hang them.

"This looks better," I said.

Yesterday I went online to look at the trees.  None of them were decorated.  I swear I started that.